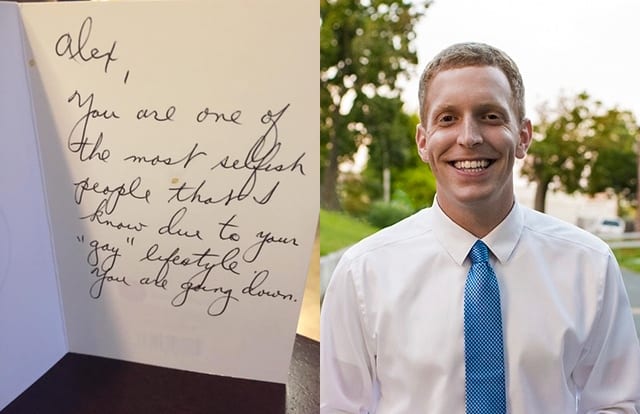 Out Holyoke, Massachusetts Mayor Alex Morse has been targeted in two incidents of ugly anti-gay abuse since the election, and shared a threatening note he received on Friday.

“Alex, You are one of the most selfish people that I know due to your “gay” lifestyle. You are going down.”

Morse, who was elected mayor in 2011 at age 22 after running as an openly gay candidate, posted the note to Facebook, and wrote:

“Anonymous hate mail isn’t uncommon and doesn’t typically bother me, but given we have a President-elect who just announced the appointment of an Attorney General who will do nothing to protect LGBTQ Americans and people of color, it’s important to bring to light the progress we need to protect and the challenges still ahead. #TrumpsAmerica“

In the second incident, one of Morse’s campaign signs was defaced and posted high in a tree near a public field, The Republican reports:

The added words on a surface attached to the Alex Morse for Mayor campaign sign were “sucks” and what appeared to be an attempt to spell “literally,” though it’s misspelled as “litteally” and “www.gay.com.”

Morse said his understanding was supporters were en route to remove the sign.

After an acquaintance told him of the sign, Morse drove over to the spot and took photos of it himself, he said.

He was unsure if the altered sign was related to the anonymous letter, but he said that as with the letter, he would forward information about the sign to Police Chief James M. Neiswanger, so that police have a record of such actions.