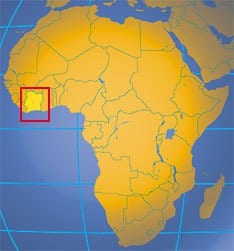 Ivory Coast, “a country known for its relative tolerance of lesbian, gay, bisexual and transgender people,” has sent two men to prison for same-sex sexual acts in its first-ever conviction of that nature, News 24 reports:

The men denied having a sexual relationship, Espace Confiance said in a statement.

The verdict was handed down on November 3 by a court in Sassandra, a coastal town more than 250km west of Abidjan, the commercial capital. A copy was not available on Wednesday.

Court officials have declined to answer questions about the case, saying the trial was public and all relevant information was described for those who attended.

Ivory Coast does not criminalise same-sex sexual acts between consenting adults. However, the penal code does criminalize public indecency, though there are no other known cases of this provision being used to target people engaged in same-sex sexual conduct, Koffi said.

Anti-gay sentiment has been seen rising in Ivory Coast in recent years, however.

In 2014, the headquarters of the African nation’s most prominent LGBT rights organization was attacked by nearly 200 people who stormed the offices of Alternative Cote d’Ivoire in Abidjan, breaking windows and stealing office equipment. It was part of a series of coordinated attacks on the LGBT community, officials said.

And shortly after the attacks on Orlando’s Pulse Nightclub, a group of gay men in Ivory Coast were forced to flee their homes in fear for their safety after the U.S. Embassy published a photo of them signing a condolence book for victims of the June 12 massacre.

Previous Post: « Sia Brings Bollywood-esque Flourishes to Her New Cinematic Anthem ‘Never Give Up’ – LISTEN
Next Post: 10 Reasons That ‘Falsettos’ is the 2016 Broadway Show Every Gay Person Needs to See »