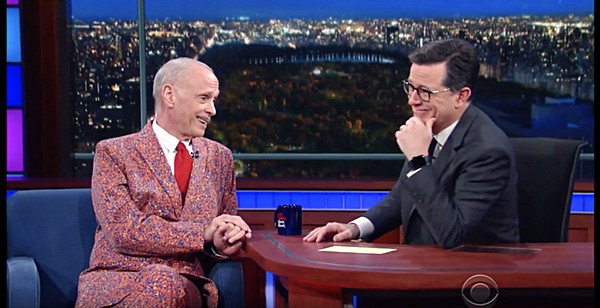 It’s not easy to shock Stephen Colbert, but filmmaker John Waters’ Christmas wish is something the Late Show host sure never expected to be uttered across his desk.

Waters stopped in to promote his 18-city holiday show, A John Waters Christmas, and spent some time talking with him about his holiday tradition, in which he brings a swag bag to his sister’s house of all the free things companies send him and gives it to his nephews and nieces. His niece once ended up wearing a “bossy bottom” t-shirt.

When asked what could possibly shock John Waters, Waters replied:

“The election shocked me, certainly. It shocked Trump. I lived through Nixon, I lived through Reagan. So, we can deal with him. Trump at least has met a gay person. But Pence is the one I’m really worried about. I think he might not last four years, but I’ll get through it. I’ll get through it. I hate it when people say ‘I’m leaving the country.’ No one cares. Go ahead. Really.”

“The whole thing about Pence his policies are so terrible. With gay people, he wanted to not have AIDS funding and give it to conversion therapy. Even Pence wouldn’t want me to be straight. What would I do – be doing the electric slide and ogling Tiffany Trump. You know, it’s hard to imagine. So I think he deserved what he got at Hamilton. He better be careful if he goes back to Broadway  – like I hope he doesn’t go to the revival of Bette Midler in Hello Dolly – because those chorus boys’ll come out and give him a new kind of %$##$%.”

With Colbert’s eyebrow already raised over Waters’ potty mouth, he lets the host know what he really wants for Christmas.

“I want to start a new sex club. We don’t have them any more.”

Waters has a raunchy publicity stunt planned for the club as well:

“All the gay women from Provincetown would go to Fire Island and raid the Meat Rack there, and then all the nude men would come to Provincetown on baby lesbian weekend which is Memorial Day weekend and then they’d have sex – lesbians and gay men together – and it would be a new strain of heterosexuality! … If there’s any backers out there my club would be called flip-flop. It’s very 2018.”

Previous Post: « One Million Moms Comes For Zales Because of Gay-Inclusive Commercial – WATCH
Next Post: Nikki Haley is Trump’s Pick for UN Ambassador »