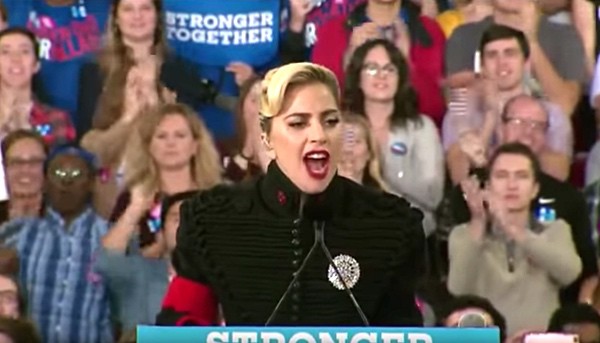 Wearing a jacket worn by Michael Jackson when he went to the White House to meet then President George H.W. Bush in 1990, Lady Gaga excited the crowd in Raleigh, North Carolina at a midnight rally for Hillary Clinton last night.

“Be a part of history. What I’m asking you is to be in this moment right now with us and fight for your future and the future of our children. It’s so amazing because no matter how absurd and mean he became, she smiled bravely. And she continued on…she kept going. And she kept fighting for women’s rights, she kept fighting for the care of our children, she kept fighting for those who are in need. And the truth is that Hillary Clinton has done this for her entire career. She didn’t just wake up one morning and decide she wanted to be president. She has had a career in politics that has spanned decades of experience, education, leadership, and wisdom.”

Clinton was joined by former President Bill Clinton and her daughter Chelsea at the packed event:

Meanwhile, in Grand Rapids, Michigan, Donald Trump was finishing his campaign, critical of the celebrity star power that had come out for Clinton in recent days: