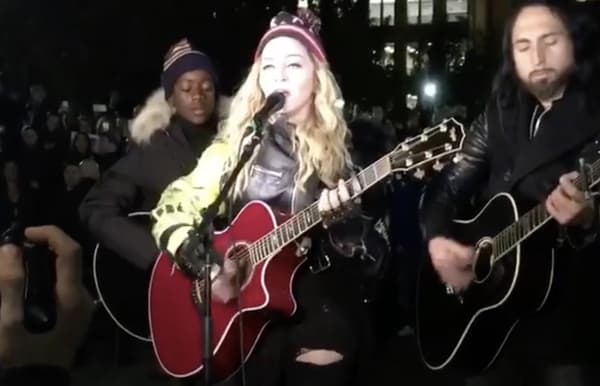 Madonna held a surprise concert in NYC’s Washington Square Park last night at 7:30 pm, announcing the gig just a half hour before it was set to begin. A growing crowd joined the singer in the park for the acoustic folk-concert-like concert, billed as “a surprise, impromptu rally for Hillary Rodham Clinton.” in which she performed “Express Yourself”, “Don’t Tell Me”, John Lennon’s “Imagine”, “Like a Prayer”, Pete Seeger’s “If I Had a Hammer”, and “Rebel Heart”.

Madonna was joined on guitar by her son David Banda.

Said MAdonna as she began the show:

Previous Post: « Dixville Notch, NH, First Hamlet in the US to Vote, Breaks for Clinton: WATCH
Next Post: Lady Gaga Fires Up Midnight Rally for Hillary Clinton in Raleigh: WATCH »