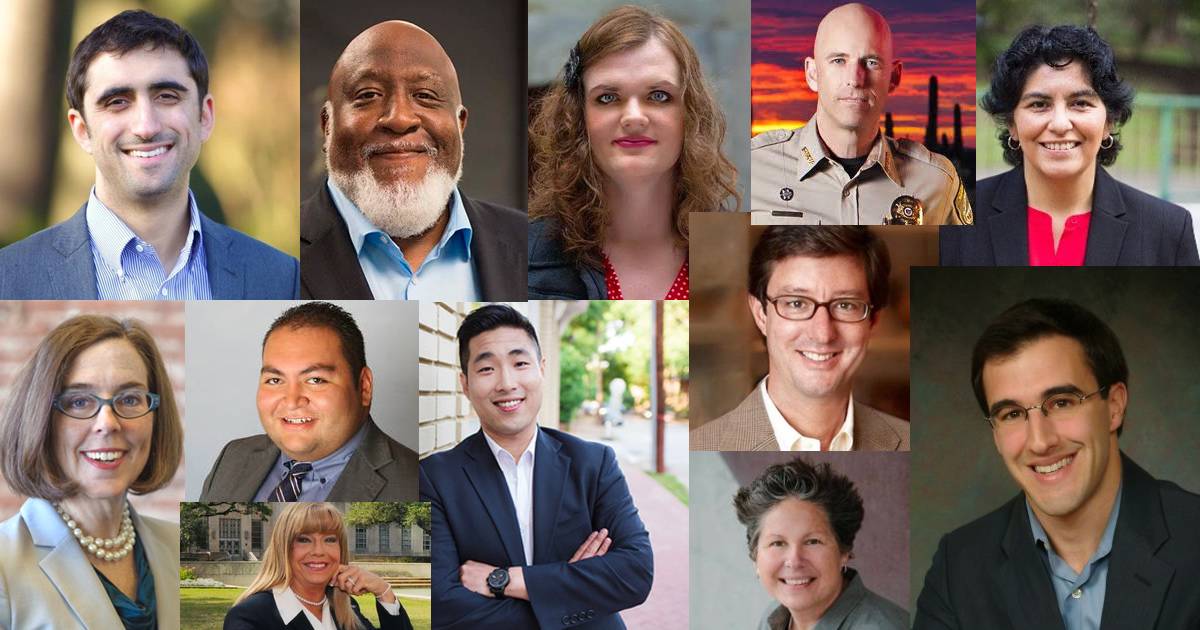 Republican supporters of a Congressional candidate dubbed a “mini-Trump” in Minnesota used a family photo of his Democratic lesbian opponent to draw attention to “her female marriage partner and their 4 teenage sons.”

Democratic opponents of a gay Republican candidate for sheriff in Arizona ran an ad that claimed “we can’t trust him with our kids.”

In Oregon, threats and taunts against incumbent Governor Kate Brown, a bisexual, have escalated in recent months over her calls for tighter gun controls, prompting an increase in her security detail.

And a story in the conservative Des Moines Register characterized Iowa’s openly gay Republican candidate for the state senate as a 50-year-old man “living with his mom” and described his Democratic opponent as having a “muscular campaign organization.”

But while anti-LGBT sentiments and tactics might still be in evidence these days, there is much to be appreciated for how matter-of-factly the sexual orientation of most LGBT candidates is being regarded. Many LGBT incumbents face no opposition to reelection. And in the San Francisco Bay Area, there are two races in which the competition is between two openly LGBT candidates.

Even in the South, in conservative and solidly red Kentucky, openly gay Democratic candidate Jim Gray told the Washington Post his being gay hasn’t been a problem on the campaign trail.

Add to that at least 20 openly LGBT people running for state senate seats, 70 running for state house seats, one governor and four other statewide offices, at least 62 local offices and 18 seats on various state and local courts, and the total –191 – sets a new high (compared to 152 in 2012 and 164 in 2010).

Here’s a look at some of the more high-profile races involving LGBT candidates: 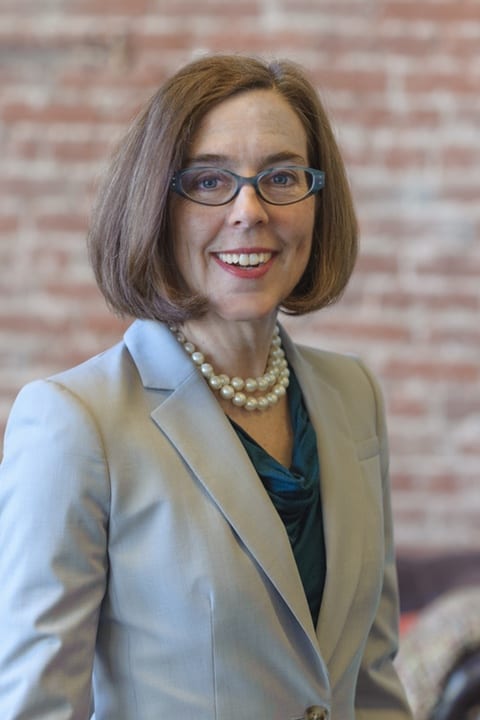 Oregon Governor Kate Brown: Brown, who identifies as bisexual, took office in February 2015 when her predecessor resigned in scandal. She’s considered a safe bet to keep that job. A Portland-based polling firm found her eight points ahead of Republican challenger Bud Pierce in early September.

Brown was previously secretary of state; Pierce was an oncologist. But there have been some troubling moments for Brown this year. Earlier this month, pro-gun demonstrators burned an effigy of her, and the Oregonian reports that Brown’s security detail has been increased. The paper reported that someone posted a message on Twitter, calling Brown a “sexually confused progressive” and blamed her for the death of a man who joined a group trying to occupy a federal wildlife refuge in the state.

Another threatened an “attack” on her house for a ruling by a state labor commissioner who ordered a bakery to pay $135,000 to a same-sex couple for refusing to sell them a wedding cake. But the Oregonian also noted that a previous governor, Barbara Roberts, received death threats in the 1990s over her support for pro-choice and efforts to protect the spotted owl.

Ten new candidates for Congress: In addition to Jim Gray’s run for the U.S. Senate in Kentucky, one other LGBT candidate, Misty Snow in Utah, is seeking a Senate seat and eight new candidates are seeking House seats. 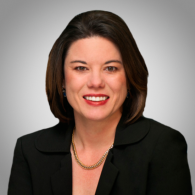 Most of them are considered long shots, but Angie Craig in Minnesota has the best chance of getting there. Her race is polling as a “toss up,” according to RealClearPolitics.com.

Craig, a vice president of global human resources for a medical devices manufacturer in St. Paul, left that position to run for Minnesota’s 2nd district seat in the U.S. House. Craig’s website bio features a photo of her, her wife, and their four boys. She’s the Democratic Farmer Labor party candidate for a seat opened up by retiring Republican John Kline, and she’s running against a former talk show host, Jason Lewis, whose provocative statements prompted The Atlantic magazine to dub him “Minnesota’s mini-Trump.”

Among other things, Lewis has characterized the “vast majority of young single women” as caring about only “abortion and gay marriage” and called the idea of allowing transgender students to use the restroom of their gender identity “an abomination.” And he’s argued that “Gay couples are no more discriminated against than the polygamist, the drug user, or the loan shark.” One state GOP official used a photo of Craig’s family to solicit attendance to a Lewis fundraiser, noting that Craig is “liberal and this is her family.  She and her female marriage partner and their 4 teenage sons.”

Gay and Lesbian Victory Fund President Aisha C. Moodie-Mills said the use of Angie Craig’s family photo was used “to attack both her and LGBT families” and is “more indicative of the hate her opponent Jason Lewis spreads, than it is of politics for LGBT candidates nationwide.”

“LGBT candidates undoubtedly face additional hurdles because of homophobia and transphobia, but fortunately these attacks are less prevalent than in the past,” said Moodie-Mills.

Craig has raised almost $1.5 million for her campaign, according to Federal Elections Commission records. Lewis has raised $369,000. 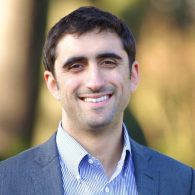 Washington State Rep. Brady Walkinshaw, 32, is running for the state’s 7th district seat to the U.S. House against another progressive Democrat, State Senator Pramila Jayapal. Jayapal got twice as many votes as Walkinshaw during the primary, but, as one of the top two vote-getters in the nine-person field, Walkinshaw advanced to the general election. Walkinshaw has also picked up some important endorsements: the Seattle Times and the third top primary vote-getter, openly gay King County Council Chairman Joe McDermott. Walkinshaw’s campaign website notes that he lives with his husband on Capitol Hill, a predominantly gay neighborhood. 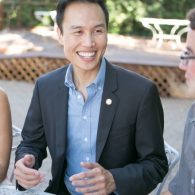 In California’s 46th Congressional district, openly gay Mayor Bao Nguyen, of the City of Garden Grove, is one of two Democrats in the general election for an open seat vacated by a Democrat. But the other candidate in this race got more than twice as many votes as Nguyen during the primary and is likely to prevail November 8.

Oklahoma State Senator Al McAffrey is making a second run for a U.S. House seat to represent Oklahoma’s 5th Congressional district. He won this year’s Democratic primary, despite a recount to challenge his 40-vote margin of victory. But he’s got a tough race now against a well-funded one-term incumbent Republican.

In addition to incumbent U.S. Rep. Kyrsten Sinema, there are two new openly gay candidates for Congress in Arizona November 8 — a Republican and a Democrat, running in separate districts. 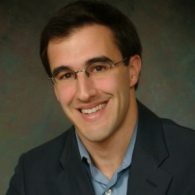 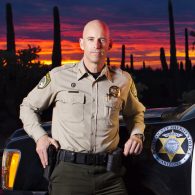 In Congressional district 1, openly gay Sheriff Paul Babeu of Pinal County is the Republican, running seven points in the polls behind the Democrat for an open seat. Babeu’s campaign seems hobbled by news that he approved of the use of controversial discipline measures against students at a school he ran for at-risk youth in Massachusetts. An attack ad from Democrats focuses on that scandal and says, “We can’t trust him with our kids. How can we trust him in Congress.” Log Cabin Republicans criticized the ad as exploiting an anti-gay stereotype.

In Connecticut, openly gay Republican Selectman Clay Cope of Sherman is running to unseat an incumbent Democrat. The Texas native and supporter of Republican presidential candidate Donald Trump is out to unseat Democratic incumbent U.S. Rep. Elizabeth Esty, of the state’s 5th Congressional district, who earned a perfect score from the Human Rights Campaign for her voting record.

In Colorado, Democrat Misty Plowright, a transgender woman, is running against the Republican incumbent in Colorado’s conservative Colorado Springs district.

Gray told the Washington Post that his being gay has not been an issue in the campaign, but he’s also trailing 12 points behind Paul, according to the most recent poll. And the Kentucky Herald-Leader notes that a significant number of “Business Leaders for Jim Gray” have failed to contribute to his campaign coffers. His campaign has raised $1.8 million, compared to Senator Paul’s $2.3 million.

And transgender candidate Misty Snow won the Democratic primary in Utah to take on incumbent Republican U.S. Senator Mike Lee. A UtahPolicy.com poll found Lee with a 37-point lead over Snow in mid-September.

There are some familiar names and some new ones among the 90 known openly LGBT candidates running for statewide offices next month. 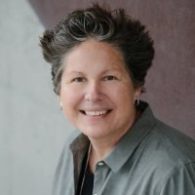 In addition to Governor Brown in Oregon, there’s Democrat Tina Podlodowski, a long-time lesbian politico, running to become Secretary of State in Washington State. Podlodowski left a successful career at Microsoft in 1995 to win a seat on the Seattle City Council. She’s up against an incumbent Republican.

Toni Atkins is another well-known lesbian politico. She served as California Assembly Speaker of San Diego but is now running for the seat representing Senate District 39. Because she won more than three times the votes her Republican challenger did in this year’s open primary, Atkins is considered likely to win November 8. 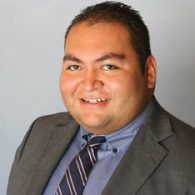 Daniel Hernandez made headlines five years ago as the openly gay staffer who helped save the life of U.S. Rep. Gabby Giffords following a mass shooting in Tucson. A Democrat, he’s now running for a state house seat against a Democratic incumbent and a Republican challenger. The top two vote-getters represent the district. 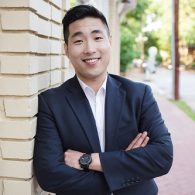 And another new name on the horizon is Sam Park, a young attorney born and raised in Georgia to immigrants from Korean. He’s making his first bid for elective office, seeking a seat in the state house. 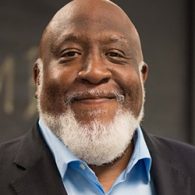 Next door, in Oakland, two other LGBT candidates are squaring off for one seat on that city’s Council: Oakland mayoral aide Peggy Moore is challenging incumbent Rebecca Kaplan for one of the city’s at-large seats. 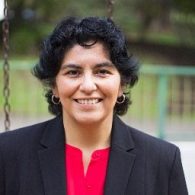 Kimberly Alvarenga is running to be the first lesbian in 16 years to serve on the San Francisco Board of Supervisors. And according to the Bay Area Reporter, her election could maintain an important part of LGBT history. Since 1977, when Harvey Milk was first elected to the Board, “there has been at least one LGBT supervisor,” notes the paper. But new term limits are jeopardizing that trend. Plus current gay Board member Scott Wiener is running for the state senate. That leaves lesbian union leader, Alvarenga, trying to fill the void. She is up against another union leader. 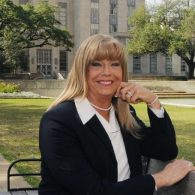 In Texas, Jenifer Rene Pool made history as the first openly transgender person to win a primary in Texas. She defeated a fellow Democrat and took 78 percent of the vote for a seat on the Harris County Commissioners Court in Houston. She’s now running against an incumbent Republican.

Not surprisingly, California has the most openly LGBT candidates (43), followed by Texas and Florida (with 9 each), Massachusetts and Georgia (with 8 each, and Washington State (with 7). Michigan has four.

Among the more “unviable” states where LGBT candidates are running this year are the solidly conservative Republican states of West Virginia, Montana, and Wyoming.

Moodie-Mills said candidates in these more difficult environments “can make an outsized impact on equality if elected in November.”

“Voters are viewing LGBT candidates holistically – so qualified LGBT candidates with the right message can run competitively and win,” she said. “It is rarely easy, but we are making enormous progress, and it upends the narrative that LGBT candidates can only win blue or purple states and districts.”