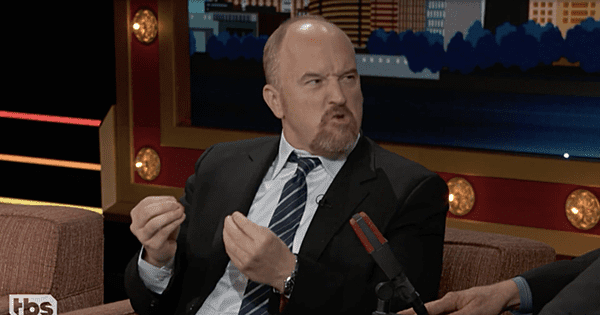 Talking with Conan O’Brien on Tuesday night, comedian and actor Louis C.K. explained why he’s all in for Hillary Clinton in the presidential election.

“It’s not a lesser of two evils, I think she’s great,” C.K. said. One of the reasons the comic is fired up for Hillary is he says America needs its first mom president. Moms ‘take care of sh*t’, he explained.

C.K. added that one of the main jobs of being president is to be proverbially sh*t on by just about everyone (think ‘thanks, Obama’). But Trump cannot handle that. When Trump gets unloaded on, “everything stops and he makes everybody pay.” Hillary, on the other hand, is the perfect candidate for scapegoat-in-chief. “We need somebody who can take abuse,” C.K. said. “Hillary’s been taking it and taking it… We’ve been hazing her. We’ve been holding her down and spitting in her mouth and yelling at her.”

As for millennials thinking of not voting, Louis has some words for them: “If you’re a liberal who’s not gonna vote, you’re a piece of sh*t.”

He also doesn’t care about candidates passing some sort of ‘cool test.’

“I don’t want somebody who is likable or cool anymore,” C.K. quipped “We need somebody who is conniving, crazy!…Just a tough bitch mother who nobody likes and just does sh*t.”