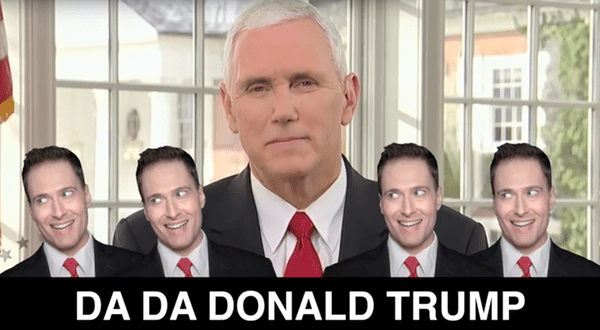 If you saw the #MikePenceGoesToHamilton fiasco unfold over the weekend, you knew it was only a matter of time before Randy Rainbow turned the entire incident into a very Hamtilon musical.

In his latest musical parody of the election that came to dinner, Rainbow gives Mike Pence and Donald Trump some advice: don’t go back to Broadway–and grow up. Set to the tune of “You’ll Be Back” (originally performed by Jonathan Groff) from Hamilton, Rainbow skewers both Trump and Pence. Referring to Trump’s Twitter meltdown over Pence being booed, Rainbow suggested, “don’t denounce a Broadway play when you won’t denounce the KKK.”

Previous Post: « Right-Wing Media Misquoted a Gay University Official and Tried to Get Him Fired – WATCH
Next Post: Bernie Sanders: ‘I’m A Woman, Vote For Me’ Is Not Good Enough – VIDEO »