A number of right wing publications have fabricated quotes by a gay university admissions officer in order to get him fired. 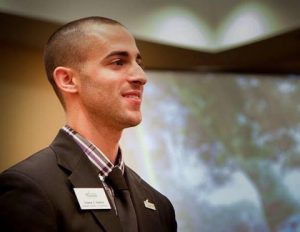 Bunting linked to a November 9 NOM blog post titled “The Plan” which outlines the goals that Brown’s group planned to work with Trump’s administration to achieve. Tandhese goals include reversing marriage equality, targeting “gender identity” directives, and passing anti-LGBT legislation such as the so-called First Amendment Defense Act. NOM also announced it’s intention to reverse Obama administration policies that “seek to coerce other countries into accepting same-sex ‘marriage’ as a condition of receiving US assistance and aid.”

In his post, Bunting concluded that if you agree with NOM, you are “a worthless piece of trash.”

College administrators everywhere are having a really difficult time accepting Donald Trump’s White House victory, but the admissions director at George Mason University just lost it. On his Facebook page, Andrew Bunting declared conservatives, Trump voters and anyone who dares to disagree with his progressive ideology are “worthless pieces of trash.”

In a conversation on Fox’s The O’Reilly Factor, Washington Examiner contributor Lisa Boothe and Bill O’Reilly called for Bunting to be fired:

BILL O’REILLY (HOST): If you are a student, and you’re applying to George Mason University, you have to write an essay. I mean, you have to tell the people about yourself. And if you hold a certain belief system, maybe that will be included in your essay. And one of the admissions deciders is telling you, “if you don’t agree with me you are a worthless piece of you know what?” Come on? How can he possibly do his job?

LISA BOOTHE: He can’t. And that’s the big problem here. And this is why he should be let go. Because his job is supposed to be objective with the admissions process. And clearly he is anything but. And, I think the university needs to take it one step further and do a review of the applications process to ensure that no students and previous applicants — that they were not discriminated against based off of their political ideology or Christian beliefs. Because the statement that this individual made on his Facebook post was related to gay marriage, and was actually — cited something from the Southern Poverty Law Center, which has labeled groups like the Family Research Council hate groups.

O’REILLY: So, well, I want to get this right. So, you would fire him outright? He’s done, if you were the chancellor?

BOOTHE: Yes. And I think he needs emotional therapy puppies. Maybe he needs to attend a cry-in. But yeah, I think he should be let go.

“…if Bunting plays a role in denying admission into GMU’s freshman class a high-school senior because that student expresses Evangelical or Catholic beliefs on marriage or sexuality—or a secular conservative who expresses a conservative political viewpoint on any public issue or applaudes Republican victories on Election Day—then GMU would be violating the First Amendment, and could be sued by that applicant for illegal discrimination.”