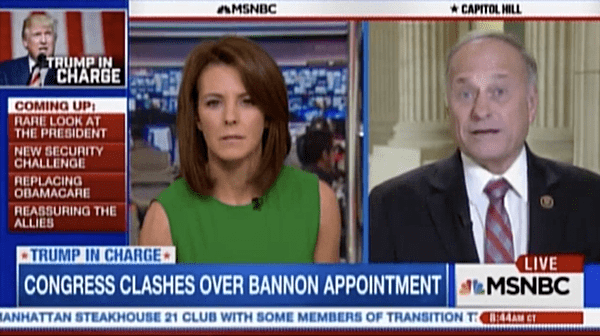 King is a staunch supporter of Bannnon’s and called him a “brilliant strategist” and “dedicated patriot.” He has also derided what he terms “false accusations” against him.

As Talking Points memo notes, Ruhle put it to King thusly: “Just a few minutes ago I heard Steve Bannon on tape say ‘liberal dykes. You okay with that?”

The tape being referred to comes from a 2011 interview in which Bannon said conservative women are vilified by progressive because they are not a “bunch of dykes that came from the Seven Sisters schools up in New England.”

King appeared flummoxed by the question, responding, “I hadn’t heard that tape and I don’t know what the context of it would be in. So no, I wouldn’t say I was either okay with it or not okay with it.”

King then went on imply that disgusting comments made in years prior don’t matter because America elected Trump despite his P—y-gate.

You can listen to the Bannon interview in question, below.

Previous Post: « President Obama Names Ellen DeGeneres as Presidential Medal of Freedom Recipient
Next Post: Keith Olbermann Decides Whether We Should Give Trump a Chance – WATCH »