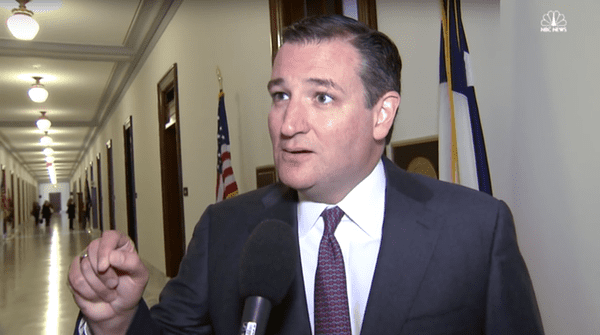 Texas Senator Ted Cruz is keeping the door open on being appointed to the Supreme Court by Donald Trump.

Cruz had reportedly expressed interest in becoming Trump’s attorney general. Those hopes however were dashed when Trump named racist and homophobic Alabama Senator Jeff Sessions for the job.

The Hill reports on Cruz and SCOTUS:

Asked Friday at a National Lawyers Convention event whether he’d accept a high court nomination, Cruz responded, “What I will say is that history is long and can take unexpected paths.”

“I think it is absolutely vital that that seat and every other seat that comes vacant on the court be filled principle constitutionalists who will be faithful to the law and will check their own policy preferences at the door,” he added.

Talk of Cruz on the Supreme Court began this past weekend when Sen. Lindsey Graham threw out the idea.

However, when asked whether Trump would Cruz to fill the vacancy left by Antonin Scalia, Trump campaign manager Kellyanne Conway suggested it would not. Conway insisted that the new administration would only name someone from the list of 21 potential SCOTUS nominees it previously announced.

PREVIOUSLY – SCOTUS: Cruz Is Out, But Trump Might Appoint Homophobic Judge Who Allegedly Posed for Gay Adult Photos

Watch a news report of Cruz talk about his meeting with Trump this week, below.

And also watch Rachel Maddow poke fun at Cruz who now, despite all his protestations at the end of the primary season, is essentially Trump’s “servile puppy dog.”