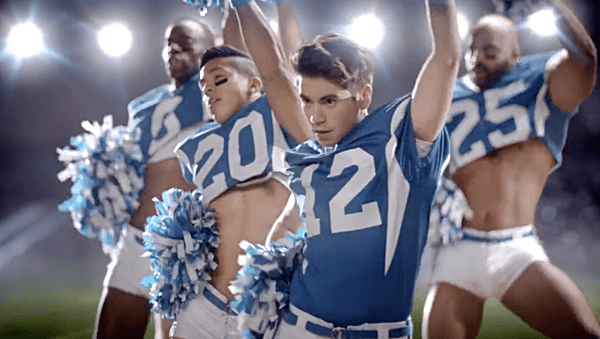 Conservative organization the Parents Television Council (PTC)–a group that is “very very afraid of gay characters“– has decided that The Real O’Neals is the most profane show on TV.

Loosely based on the life of Dan Savage, The Real O’Neal follows a teen boy (Kenny, played by Noah Galvin) who comes out to his Catholic family and begins to explore who he truly is.

PREVIOUSLY: Noah Galvin Asks the Gays to Dial It Down on ‘The Real O’Neals’ – WATCH

The PTC was none too happy with The Real O’Neals for all its “profane” talk about sex. (Because sex is bad.)

“It’s bad enough that children are increasingly exposed to vulgar dialogue on television at all hours of the day. It’s even worse that they’re seeing the vulgarity coming directly from the lips of other children,” said PTC President Tim Winter. “This troubling new trend should concern every family, given the inarguable evidence that children are influenced by what they see on TV.”

“Adding fuel to the fire is the contemptuous content ratings system that allows TV networks to rate such explicit content TV-PG or TV-14, suggesting to parents that the programs are appropriate for their kids,” he added. “Yet children are being exposed to age-inappropriate levels of profanity and sexual dialogue especially on family-targeted sitcoms, such as ABC’s ‘The Real O’Neals,’ which contained more sexual dialogue involving teen and child characters than any other primetime program on broadcast TV,” he added.

PTC was also angry at Glee back when it was on the air.

Watch clip that surely would get the Parents Television Council’s panties in a bunch, below.

And support shows that get right wing-nuts riled up by watching The Real O’Neals on Tuesdays at 9:30 PM / 8:30 central.