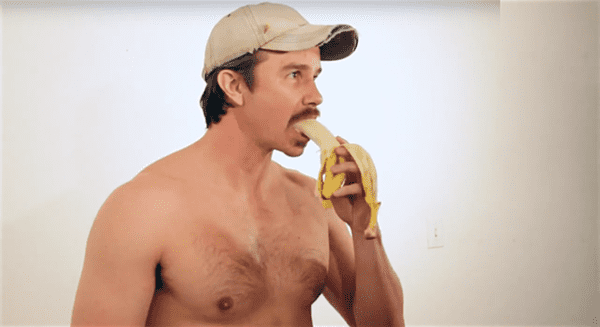 Comedian Michael Henry’s latest viral-worthy video is a bit of a curve ball.

If you’re a fan of Henry’s sketches you know that they usually entail a gag — a monologue, some repartee, a scene even — about the divide between gay men and straight men in today’ culture. His latest video continues along that track but this time there are no jokes–at least not in the traditional sense.

“Do Straight Guys Eat Bananas The Same Was As Gay Guys” is like a video instillation you might see at a pretentious art gallery if said video and said gallery had a twisted gay sense of humor. It would make a funny replacement, for example, for the opening of Tom Ford’s Nocturnal Animals.

The narrative and the punchline, for this video are shaped by the video’s ending, which gives a definitive answer to the question in the title.

Watch below to find out what that answer is.