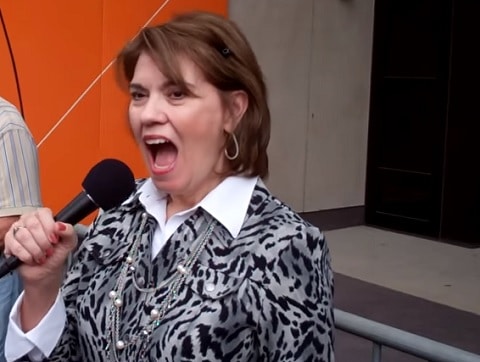 Devil-obsessed shrew Linda Harvey is once again busy advising god-fearing Christians where they should avoid shopping this Christmas.

Speaking on her radio show, Mission America founder Harvey whined that the season of good will is becoming increasingly difficult because so many businesses are pro-LGBT rights.

“For any Christian who wants to spend hard-earned dollars with family-friendly, Christian-affirming retailers, restaurants and service providers, the list is growing shorter all the time,” said Harvey.

Back in 2011, she complained “I stopped shopping at Macy’s in 2011 after learning about the retailer’s grossly unjust policy against women.”

“Macy’s management said ‘yes’ to a transsexual young man’s demand to change in the women’s dressing room and rejected a Christian employee’s attempt to block his inappropriate access, even firing her because of her principled actions.”

In late November, Harvey provided a list of businesses to avoid, gleaned from the Human Rights Campaign’s Corporate Equality Index.

It might be tough to never shop at any of these, but at least we can do what’s possible.

We would advise Towleroad readers to do the opposite of what Harvey is suggesting.

On Saturday, Harvey railed against those who would persecute Christians for celebrating Christmas. She also suggested that anyone who says that Jesus was not born in December has a screw loose.

Have a listen below and Merry Christmas Linda!