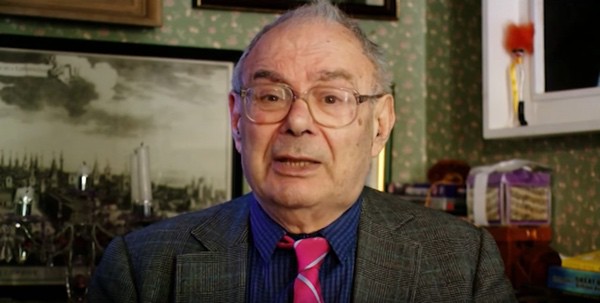 Lionel Blue, the UK’s first openly gay rabbi who appeared on BBC Radio 4 for 30 years during the Today show’s Thought for the Day segment, died this morning.

It is with great sadness that we announce the death of Rabbi Lionel Blue OBE, who died in the early hours of this morning.

Lionel was a wonderful & inspirational man, who spoke with such wisdom and humour and whose words reached out far beyond the Jewish Community.

He was a friend and mentor to many and his courage in coming out as gay in the 1970s paved the way for many other Jews, including many Rabbis.

As part of Rainbow Jews he was interviewed about his life, the interview and a transcript can be found at: http://www.rainbowjews.com/rabbi-lionel-blue-a-pioneer-and-legend/

We will not see his like again. May his memory be for a blessing.

Lionel’s funeral will take place at Cheshunt Jewish Cemetery in the woodland area at 12noon on Tuesday 20th December.

In recent decades, he had two heart bypasses, two bouts of cancer and Parkinson’s disease.

“He never pretended that life was easy, or that religion solved everything; instead, he shared his own failings and foibles, and showed how to get through the rest of the day.

“Through the popularity of his broadcasts and books, he made rabbis more human, Judaism more understandable, and faith in general more user-friendly.

Previous Post: « African Nation Chad Is the 77th Country To Criminalize Homosexuality
Next Post: Here’s a List of Retailers Anti-Gay Activists Want You to Avoid This Xmas, So Please Go Shop There »