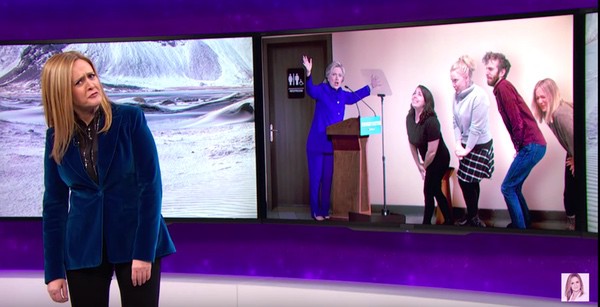 Samantha Bee is tired of the post-election mudslinging between various factions of the Democratic party.

Bee calls foul on the buzzword “identity politics,” offering her own definition for the euphemism: “Identity politics is a dismissive term for what we used to call civil rights and equality.”

And since the election, Republicans have all kinds of advice for Democrats, which the Democrats seem to be lapping up. Bee isn’t having it.

“Come on, Democrats, there’s loser Stockholm Syndrome and then there’s taking your talking points from Steve Doocy and pals.”

Republicans claim that the Democrats never mention jobs, a claim Bee destroys with a montage of clips of Hillary Clinton talking about what? Jobs.

And in North Carolina, Democrats won by standing up for transgender rights:

“You know what happens when Democrats stand up for transgender rights? They win. What do you know? And not just a governorship.”

“Look, Democrats, I know you’re having a rough time. You hate being lost in the wilderness — you have allergies, and you were reading a book in the corner when your Scout leader taught everyone which leaves to avoid. But if your panic over a loss makes you abandon both your principles and the people who actually vote for you, then you’ll be in the wildness for a decade — or until Trump’s Cabinet sells the wilderness to oil companies.”