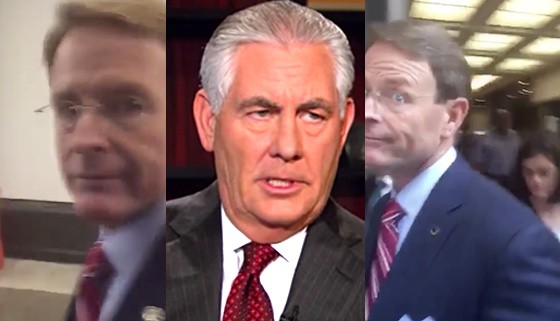 Tony Perkins, the leader of the hate group Family Research Council and an evangelical ally of Donald Trump, is roiling over Trump’s decision to pick ExxonMobil CEO Rex Tillerson for Secretary of State.

Why? Not for the reasons most are troubled. Tillerson was for gay troop leaders in the Boy Scouts, and his corporation gives to Planned Parenthood.

Writes Perkins in an email (via JoeMyGod)

Donald Trump put a lot of names in the pipeline to head the State Department, but few have fueled more controversy than ExxonMobil CEO and Chairman Rex Tillerson. The oil mogul, who’s spent his more than 40 years with the company, is one of the many names floated for the most-watched nomination of the new administration.

The Left, which doesn’t usually need a reason to oppose Trump’s choices, won’t find many here, since the ExxonMobil executive may be the greatest ally liberals have in the Cabinet for their abortion and LGBT agendas. That should be particularly alarming to conservatives, who’ve spent the last eight years watching the State Department lead the global parade for the slaughter of innocent unborn children and the intimidation of nations with natural views on marriage and sexuality.

No sooner had Hillary Clinton taken over the State Department in 2009 than the White House ordered her to use the agency as a club to beat other nations into submission on sensitive culture issues — a tradition that successor John Kerry has been all too eager to continue.

Now, after two terms of exporting radical social policy, Americans could finally see the light at the end of the Obama administration tunnel. To hear that Donald Trump may be appointing a man who not only led the charge to open the Boy Scouts to gay troop leaders but whose company directly gives to Planned Parenthood is upsetting at best. FRC knows Tillerson all too well, having worked for years to put the brakes on his reckless agenda for a scouting organization that was already dealing with staggering numbers of sexual abuse cases.

Unfortunately, the BSA, under Tillerson, ultimately caved to the pressure of the far-Left, irreparably splitting the Scouts and destroying a proud and honorable American tradition. Under his chairmanship, ExxonMobil’s score on the Human Rights Campaign’s Corporate “Equality” Index has also skyrocketed to 87 percent. Still, Trump calls Rex a “world class player and dealmaker,” but if these are the kinds of deals Tillerson makes — sending dollars to an abortion business that’s just been referred for criminal prosecution and risking the well-being of young boys under his charge in an attempt to placate radical homosexual activists — then who knows what sort of “diplomacy” he would champion at DOS?

Meanwhile, it seems Tillerson will have plenty of GOP opposition over his ties to something (or rather, someone) else: Russian President Vladamir Putin. The pair’s friendship, which started in the 1990s, is raising plenty of eyebrows on Capitol Hill, where senators like Marco Rubio (R-Fl.) and John McCain (R-Ariz.) weren’t shy about their objections.

“It’s a matter of concern to me that he has such a close personal relationship with Vladimir Putin,” McCain said Sunday, pointing out the “enormous deals” the two had done together. “That would color his approach to Vladimir Putin and the Russian threat.” Rubio echoed those concerns, tweeting “Being a ‘friend of Vladimir’ is not an attribute I am hoping for from #SecretaryOfState.”

Russia is just one hurdle Tillerson will face in his confirmation hearings with Senate Republicans. He’s also supported the carbon tax and, like President-elect Trump, has never held political or diplomatic office. For groups like FRC, who are tired of the State Department being used as a weapon in the global war on values, the problems run much deeper.

The agency already has an image problem after almost a decade of failing to respect the traditions and beliefs of other countries. The last thing Americans need is a leader who would continue to advocate (however subtly) the leftist social policy of the Obama years.

These are most people’s concerns: