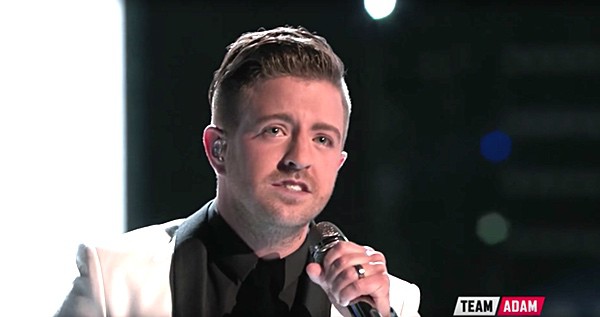 Billy Gilman played his final hand on the finale of The Voice on Monday night, turning in a soaring version of the Frank Sinatra classic “My Way” which brought him to tears. He was joined in the second act by his coach Adam Levine for a duet of The Everly Brothers’ “Bye Bye Love”, and delivered an original track – “Because of Me” for the third.

A former child star, he was just 11 years old when he scored a country hit with “One Voice,” earning him a Grammy nomination. His career, however, stalled after that, leading to a comeback now as a pop artist on “The Voice.”

…Opening the two-hour live broadcast, the artist performed his cover of Frank Sinatra’s “My Way,” doing the first verse a capella. He was in tears by the end, and received a standing ovation from coach Adam Levine, as well as Miley Cyrus and Alicia Keys. Cyrus actually noted Gilman “performed my favorite song in the whole world.”

As Gilman became more emotional, Levine noted how he truly embodies the song has done things “my way.” The Maroon 5 front man even asked, “How do you not feel like you’ve just won ‘The Voice’ just now?!”