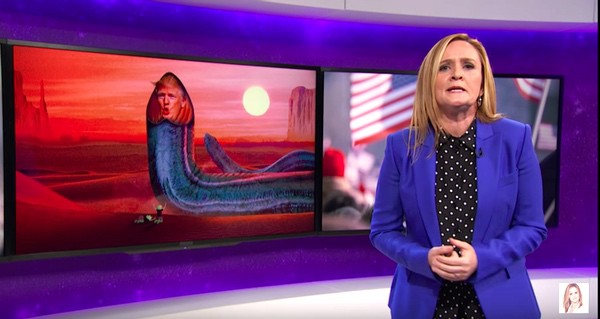 Samantha Bee returned last night and took a frightening look back at Donald Trump’s inauguration, and his first few days in office.

“President Trump delivered his pet frog’s ‘Morning in Dystopia’ speech to a mall that had more white space than the Republican plan to replace Obamacare…The whole day was swollen with lugubrious pomp and freighted with menace that left a lot of us feeling like we’d just installed Trump Emperor of Dune. It was surreal, and frankly, not very funny.”

But she actually relished the Lincoln Memorial concert:

“Trump’s concert was like his cabinet: male, overwhelmingly white, and devoid of any A-list talent.”

And took a sour look at our new reality:

“So far this week, our new overlord has torn up treaties, taken the first steps toward a Muslim ban, ordered the construction of his dumb-ass wall and threatened to invade Chicago like his own little Crimea. Dress rehearsal’s over guys! The tragedy has begun. As the curtain goes up on ‘Sh*tshow, the Musical, I want you all to take the hands of the people sitting next to you, squeeze tight, and remember, really remember, that the president could only get 3 Doors Down to play at his inauguration.”