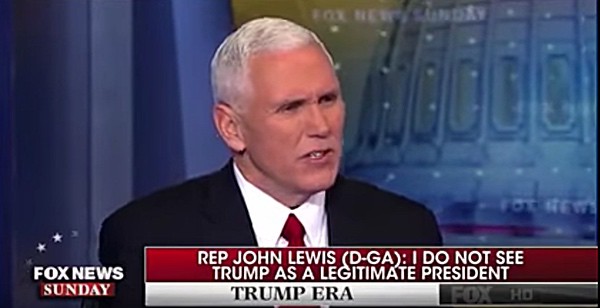 On FOX News Sunday, Mike Pence defended remarks made by Donald Trump about Rep. John Lewis. Lewis said in an interview published Friday that he does not consider Trump a “legitimate” president and believes his election was a “conspiracy” on the part of the Russians.

Trump in turn attacked Lewis on Twitter, calling the civil rights icon, who had his head cracked open as he walked across the Pettus Bridge in Selma on Bloody Sunday, “all talk, no action.”

Pence said in an interview on “Fox News Sunday” that he has “great respect” for Lewis but was “deeply disappointed” in his comments.

“I was deeply disappointed to see someone of his stature question the legitimacy of Donald Trump’s election as president and say he’s not attending the inauguration,” Pence said. “I hope he reconsiders both positions.”

Pence argued that Lewis’ remarks were “an act of irresponsibility” and Trump “has the right to defend himself,” according to Fox News’ writeup of the interview.

“I think — I think Donald Trump has the right to defend himself.  When someone of John Lewis’ stature, someone who is not only an icon in the civil rights movement, but also someone who by virtue of his sacrifice on that day that we know as Bloody Sunday, he crossed the Edmund Pettus Bridge and he suffered that abuse and it was — it was true that that the voting rights — for someone to use his stature to use terms like this is not a legitimate president, it’s just — it’s just deeply disappointing to me, and I hope he reconsiders it.

“But what Donald Trump was talking about their was literally generations of failed policies coming out of Washington, D.C., that have failed to many families and too many cities across this country.  I will tell you, Donald Trump is a man who is profoundly impatient with failure.”

Dr. Martin Luther King, Jr. was my friend, my mentor; he was like a big brother.

Dr. King taught us to recognize the dignity and worth of every human being. He was the moral compass of our nation. #IHaveADream

He marched for us. #goodtrouble pic.twitter.com/ulzC3CBAeh

He protested for us. #goodtrouble pic.twitter.com/DDkjh7USxD

He went to jail for us. #goodtrouble pic.twitter.com/saHB1WsfbV