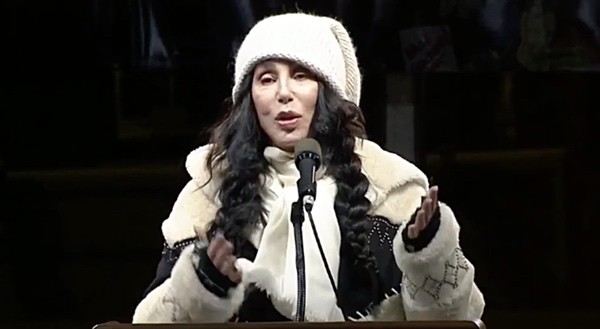 As Mr. Trump was serenaded at a concert on the National Mall in Washington that featured performers like The Piano Guys, a YouTube sensation, and the percussionist DJ Ravidrums, Robert DeNiro, took the stage in New York to mock Mr. Trump’s twitter habit as Cher and Mr. Ruffalo watched. Later, Alec Baldwin reprised his Trump impersonation from “Saturday Night Live,” joking that he was heading over to the Russian Consulate, before calling for “100 days of resistance” from the crowd.

Speaking backstage, Cher said that she took part because “I want to show people the danger.” She also said that she doubted Mr. Trump would find the White House to his taste. “The Lincoln bedroom is fabulous,” she said, “but it’s not big.”

“Thank you for showing up on this final night of the pre-Trumpian age,” Moore said.

The director then led the protesters on a march to nearby Trump Tower on 57th St. where the crowds thinned out.

Moore called for 100 days of protest against Trump as he kicks off his presidency.