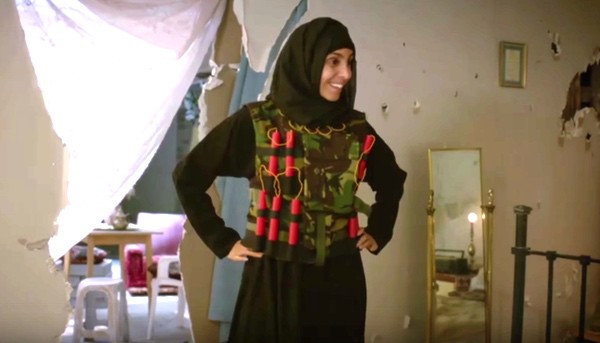 A BBC2 sketch comedy scene from the show Revolting that spoofs the “Real Housewives” formula by taking it into the world of ISIS terrorists has gone viral (more than 16 million views on Facebook) though many are expressing disgust that it projects an unflattering image of Muslim women at a time when Islamophobia is rife and is insensitive to those who have been victims of terror.

One scene sees one of the characters modeling her new outfit: a suicide vest. “Oh babe, you look gorgeous!” says a friend, before telling the camera: “She looked massive. You’re gonna need a lot of Semtex to kill that one.”

Another shows a character explaining that it’s “only three days to the beheading, and I’ve no idea what I’m going to wear.”

Perhaps predictably, the response from social media was less than enthusiastic. Many said it was “distasteful” when there were many cases of British girls under the age of 18 who had been groomed online and lured to the Islamic State.

One Facebook user described it as having “all the fun of an off-base Amy Schumer skit with the same lack of awareness of anything other than itself,” adding that the humor was “only funny if you look down on someone else and enjoy seeing them unhappy because they are not white and Christian.”

But not everyone has been offended, with several Twitter users pointing out that the whole point of satire was to bring people down to a level.

Constructing an image of Muslim women as oppressed and fond of terrorism at a time of widespread gendered Islamophobia is deeply sinister.

It’s a shame that the humourless and perpetually offended do not see this for what it is – progress.https://t.co/SrNHvROMQS