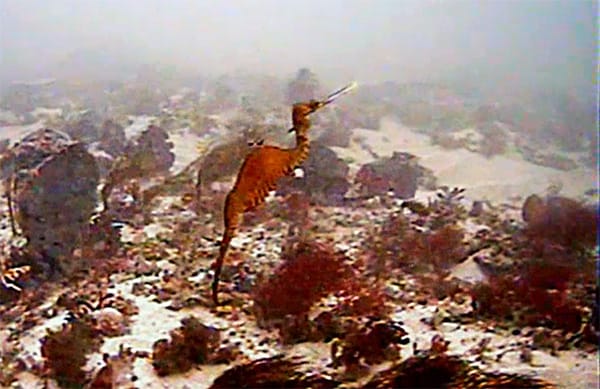 While scarce footage of the giant squid had long been the holy grail of marine life researchers, the recently discovered ruby seadragon has now also been captured on film for the first time. Initially identified in 2015 as a distinct species based on collected specimens, only the third kind of seadragon known after the common and leafy varieties found off the southern coast of Australia, this relative of the seahorse inhabits deeper waters than its cousins.

Found at depths of more than 170 feet, off limits to scuba divers, the ten-inch long fish was filmed in Western Australia’s Recherche Archipelago by a team of marine biologists headed by Greg Rouse of the Scripps Institution of Oceanography, who published their results this week. Basing their search off of where the earlier specimens had been discovered, they used a remote-controlled mini-submarine equipped with a camera, which managed to record not just one but two different live ruby seadragons.

In a similar manner to how the leafy seadragon camouflages itself with its leaf-like appendages, the distinct dark red color of the seadragon seems to help it evade detection in the dark sea waters it calls home. It also appears to have a curved tail that has its own grip for manipulating objects. The curious creature has now made the jump from the sort of myths that inspired its name into the ledgers of science.