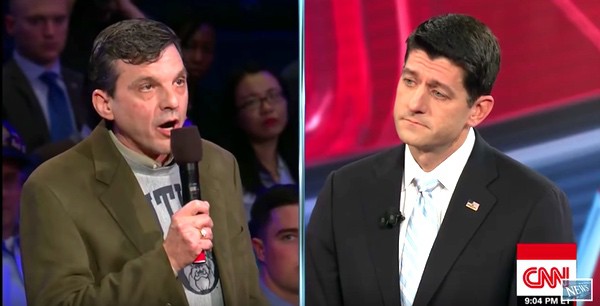 At Paul Ryan’s Town Hall on Thursday night, a former Republican named Jeff Jeans who worked on the Reagan and Bush campaigns confronted Paul Ryan on Obamacare repeal and said that thanks to the Affordable Care Act he’s alive, and thanked President Obama for saving his life.

“I want to thank President Obama from the bottom of my heart, because I would be dead if it weren’t for him.”

Jeans had a curable form of cancer but was given six months to live if he didn’t seek treatment.

“Why would you repeal the Affordable Care Act without a replacement?”, Jeans asked Ryan.

Ryan claimed that the Republicans do have an adequate replacement in the form of “high-risk pools.”

Writes Think Progress: “The problem with high-risk pools is that Republicans don’t seem willing to spend enough money on them to ensure they’ll truly cover the millions of people with pre-existing health conditions.”