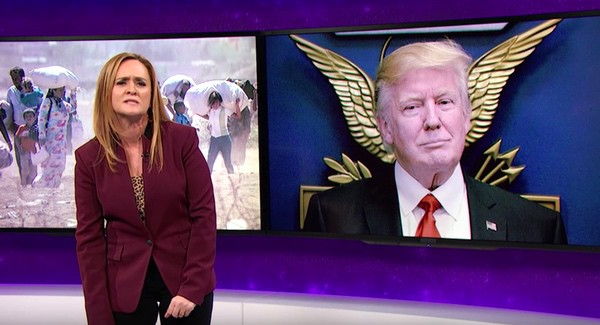 Samantha Bee shredded Donald Trump over his “not-a-Muslim-ban”, and the mass chaos its rollout caused over the weekend, causing Reince Priebus, Sean Spicer, and Paul Ryan to try and get their heads around what was actually going on.

“Confusing?”, Bee said. “Give Trump’s ban some credit. It was the healthcare.gov of Islamophobia, the Ford Pinto of intolerance, a big fat cocktail of New Coke and Zima poured onto a Microsoft Zune playing an endless loop of the Star Wars prequel’s Jar Jar Binks scenes.”

In part two, Bee pointed out the differences between immigrants and refugees, climaxing in a sizzling takedown of Dear Leader:

“I won’t mention that this refugee ban is immoral, embarrassing and inhuman. I’ll just point out that it is the act of a giant pussy. Here is a man who’s afraid of germs, stairs, books, unprocessed food, women, birds, Muslims, Russian pee tapes, inner cities and, of course, strong winds. But he can’t recognize the courage of people who survived literal war zones to come to a new country, start over with nothing and keep going each day despite the contempt with which we’re horrible enough to treat them.”

She finished with a direct address of Trump:

“You want a Muslim ban? We know you do. So say it already Mr. Straight Talker. Slap your meat on the table and face the legal consequences like a man. Don’t puss around by banning territories that just happen to be Muslim…Forget the coy euphemisms and own your pointless cruelty. That is why America voted for you….Except for the majority of America that didn’t.”