The peaceful protest was rocked by violent agitators, NPR reports:

In a statement, the university said: “The violence was instigated by a group of about 150 masked agitators who came onto campus and interrupted an otherwise non-violent protest.”

It said that at the time more than 1,500 protesters were gathered outside the event.

“This was a group of agitators who were masked up, throwing rocks, commercial grade fireworks and Molotov cocktails at officers,” UC Berkeley Police Chief Margo Bennet told The Associated Press. Police put the campus on lock down for several hours. There were no reports of arrests or serious injuries, according to the AP. 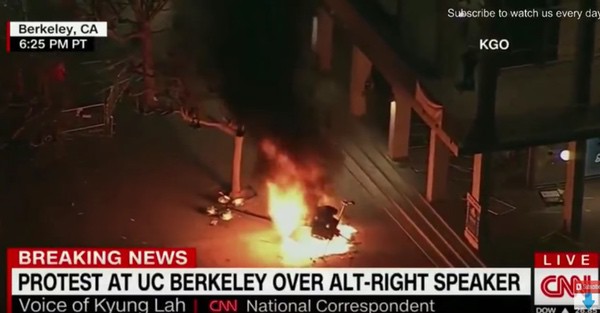 Berkeley, of course, is one of the liberal bastions of free speech and education. Students were protesting hate speech, not trying to shut down free speech. Big difference.