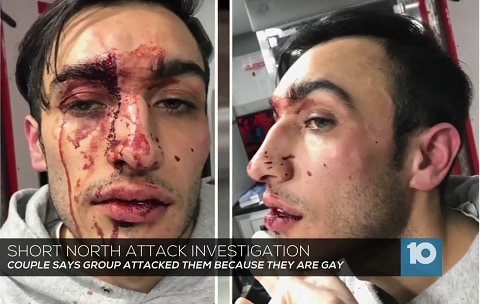 Bryson Beier and Mantej Sandhu (above), who had just moved to Columbus from California, say they were attacked by up to ten men early on Saturday morning in the Short North neighborhood.

“I thought I was going to die. I thought for sure this was the end…they just started saying like ‘f****’ to us and stuff like that, and we were like what? And just kept walking. And they were like, ‘God hates f***.

“Then all of the sudden a bottle gets thrown at us. And they were saying, ‘You’re going to hell,’ and all that stuff. We at that point stopped, turned around, we took a photo of the license plate.”

According to the couple, at this point a second car pulled up. Four or five men got out of the vehicle and joined in the assault.

Short North Beating: Gay couple believe they were attacked for who they are: https://t.co/JyJlIpLoqg #10TV pic.twitter.com/yzCZxhT8x6

“They were like, ‘You trying to mess with my boy?’ And then all of the sudden they start, they punch me in the face, throw me on the ground. and next to me he was going through the same thing with the other five black guys,” said Sandhu. “Each took a turn- punch, kick. Punch, kick. They were like, ‘Yeah, yeah.’ Punch, kick. ‘You like that?'”

“I don’t know if it was like my own personal self-protection or what, but my vision went black and my brain just kind of shut down and I almost stopped feeling for a minute.

“I was crying and begging them to stop, and I just know that whatever they were looking for, they did not find.”

Police are currently investigating and will consider whether to classify the attack as a hate crime.

Watch a report from 10TV: