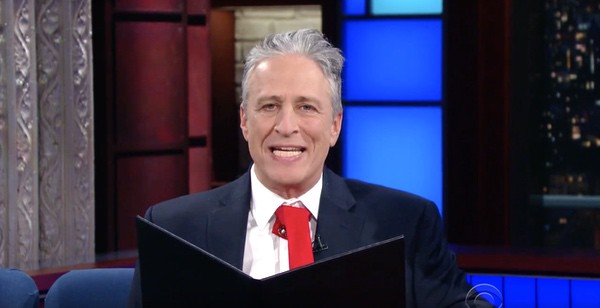 Jon Stewart showed up on The Late Show with Stephen Colbert as Donald J. Trump, to read a few executive orders of his own, but after a few comedic moments, it got pretty real.

“It has been eleven days, ELEVEN days,” said Stewart, mirroring what we’re all thinking this week. “The presidency is supposed to age the president, not the public.”

Stewart then spelled out what’s going to happen:

“And the reason that I, Donald J. Trump am exhausting, is that every instinct and fiber of my pathological self regard calls me to abuse of power. I want, no, deserve, not just your respect but your adoration, parades with tanks and the synchronized dancing and ‘why can’t they train 10,000 doves to spell out Trump in the clouds. How hard can it be? They’re already flying.’ I, Donald J. Trump, am exhausting because it is going to take relentless stamina, vigilance, and every institutional check and balance this great country can muster to keep me – Donald J Trump – from going full Palpatine.”

“We have never faced this before,” Stewart continued. “Purposeful, vindictive, chaos.”

But Stewart did have a message of hope.

“Perhaps therein lies the saving grace of my, Donald J. Trump’s, presidency. No one action will be adequate. All actions will be necessary. And if we do not allow Donald Trump to exhaust our fight and somehow come through this presidency calamity-less and constitutionally partially intact, then I, Donald J. Trump, will have demonstrated the greatness of America, just not the way I thought I was gonna.”