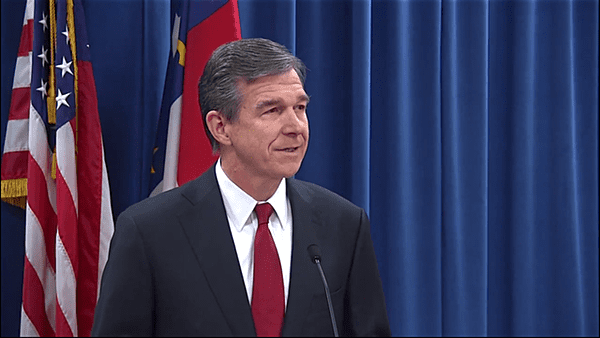 North Carolina Governor Roy Cooper signed an HB2 repeal bill that was blasted by LGBTQ and civil rights groups into law after it was rushed through the legislature in one day ahead of a looming deadline from the NCAA which threatened to pull its sports events from the state until 2022 if something wasn’t done about it.

The Democratic governor negotiated the compromise with the Republican leaders of the legislature, House Speaker Tim Moore and Senate leader Phil Berger.

“It was a very measured approach,” Moore told reporters. “I think this bill, as written, is also something that is very defensible in court. I think it’s something the public supports. No one is 100 percent happy, but I would say I’m 95 percent happy.”

Opposition and support did not fall along party lines in either the House or the Senate, as advocacy groups on the left and right criticized the measure. Some of the most liberal Democrats and conservative Republicans voted against it.

The shameful bill’s provisions include an extension for the state to continue discriminating against LGBTQ people until 2020.

The ACLU and Lambda Legal slammed the deal:

“Lawmakers must reject this disgraceful backroom deal that uses the rights of LGBT people as a bargaining chip,” said Sarah Gillooly, Policy Director for the ACLU of North Carolina. “One year after HB2 was introduced and signed into law in just 12 hours, it is shameful that legislative leaders and North Carolina’s governor are once again rushing through a discriminatory anti-LGBT measure without proper vetting or an opportunity for public input. The way to undo HB2’s profound damage to North Carolina and its people has always been a full, clean repeal, but this proposal would keep anti-LGBT provisions of the law in place and continue to single out and target transgender people. Lawmakers must vote against this proposal, and should it reach his desk, Governor Cooper should withdraw his support and veto it.”

The ACLU and Lambda Legal are challenging HB2 in federal court on behalf of four LGBT North Carolinians and members of the ACLU of North Carolina. The law bans many transgender people from restrooms and other public facilities matching their gender and prohibits local municipalities from extending nondiscrimination protections to lesbian, gay, bisexual, and transgender people.

On May 10, the U.S. Court of Appeals for the Fourth Circuit will consider a request to block the anti-transgender provisions of the law barring transgender individuals from using restrooms and locker rooms that match their gender from being enforced. In August 2016, a lower court blocked the University of North Carolina from enforcing those provisions against three transgender plaintiffs in the case.

As did the Human Rights Campaign and Equality North Carolina:

HRC and Equality North Carolina urged North Carolina lawmakers to reject a backroom “deal” that would both continue the harms of the discriminatory HB2 law and push the possibility of full repeal further out of reach. The most recent proposal would specifically prohibit cities from passing protections ensuring that transgender people are able to access facilities in accordance with their gender identity, and it would further prohibit municipalities from passing other LGBTQ non-discrimination protections through 2020.

This means that North Carolina would continue to be the only state in the nation to have shamefully funneled anti-transgender animus into a law regulating restroom access. The proposal would also prevent cities in North Carolina from establishing non-discrimination protections for LGBTQ people for at least three years, undermining efforts by cities like Charlotte to attract top talent, major businesses, and other economic opportunities.

For more than a year, Senate President Phil Berger and House Speaker Tim Moore have blocked an up-or-down vote on clean repeal of HB2, despite the overwhelming outcry from voters, businesses, and others seeking to do business in the state.

“The rumored HB2 ‘deal’ does nothing more than double-down on discrimination and would ensure North Carolina remains the worst state in the nation for LGBTQ people,” said HRC President Chad Griffin. “The consequences of this hateful law will only continue without full repeal of HB2. Sellouts cave under pressure. Leaders fight for what’s right.”

“This proposal is a train wreck that would double down on anti-LGBTQ discrimination. North Carolinians want a clean repeal of HB2, and we urge our allies not to sell us out,” said Chris Sgro, Equality NC Executive Director. “Those who stand for equality and with LGBTQ people are standing strong against these antics. We’ve got less than 24 hours before the NCAA deadline. There is no time to waste – our leaders must fight for what’s right, and that is full repeal.”

The backroom proposal is being pushed as lawmakers face a deadline tomorrow to repeal HB2 or risk losing out on bids for NCAA championship games through 2022 — a decision that will further compound the economic harm HB2 continues to inflict on the state. Just this week, the Associated Press published exclusive analysis showing the deeply discriminatory HB2 will cost the state more than $3.76 BILLION in lost business over a dozen years — and even that likely underestimates the damage.

The NCAA has not yet indicated what it thinks of the deal.