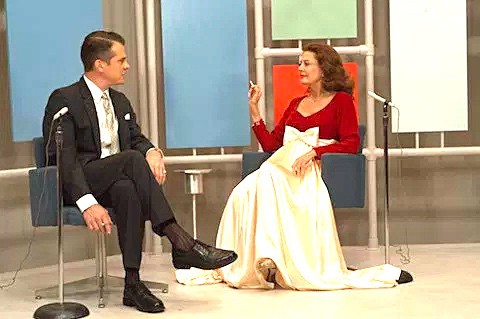 So what ever happened to What Ever Happened To Baby Jane? That’s the crux of last night’s episode of Feud: Bette and Joan, “More, or Less.” The film is wrapped, and it’s ready to hit theaters. But how will audiences receive the film? Will all the preconceived notions about older women in Hollywood ring true?

Viewers might recall (or Wikipedia could easily illuminate) how the film dominated box offices and packed theaters with eager young moviegoers. But, just because the studio is piling up profits, that doesn’t mean things are going nearly as swell for the film’s stars.

Let’s back up and dish all about drama that preceded Baby Jane’s premiere in our recap of last night’s Feud.

As Bob Aldrich puts the finishing touches on Baby Jane, both Crawford and Davis are eager to get cracking on their next role. Joan meets with her agents at William Morris to see what offers have been pouring in, so she can plan a European vacation with her twins. She might want to hold off on booking that flight so fast, because, well, there’s nothing. “F*ck you, Marty,” she roars. “If I have to find my own projects and wait for you to field offers instead of drumming them up, I don’t see the point in having an agent, or a room full of f*cking agents. You’re all fired.” Skip Rome, Joan, because a more female-friendly Hollywood also won’t be built in day.

Things aren’t going much better for Bette. First, she’s been downgraded to a junior agent who barely looks old enough to tie his shoes. In a way he paints a sunnier picture: she’s not out of work because she’s a woman, she’s struggling because the pre-release gossip says Baby Jane stinks.

Bette doesn’t need to swear and shout to get heard. Instead, she places an ad: “Mother of three – 10, 11 and 15. Divorcee. American. Thirty years’ experience as an actress in motion pictures. Mobile still and more affable than rumour would have it. Wants steady employment in Hollywood. (Has had Broadway.) References on request.” It’s a little piece of Hollywood history that required no embellishment. Davis really ran this ad before Baby Jane hit theaters, and it became the stuff of Tinseltown legend.

Then, as we know, the film opens, and it’s a hit! Now those roles can come pouring in, right? Right?!

Not quite. Although Joan and Bette soak in the warm reception from crowds (Joan is swarmed with fans after the preview, and lauded with applause over dinner), but there aren’t follow-up offers.

Bette makes do the best she can, picking up TV guest spots on Perry Mason and promoting the film on TV appearances, including one of my favorite Davis clips on The Andy Williams Show.

It’s easier for her, because she’s receiving the lion’s share of the critical praise for her portrayal of Baby Jane. With her career floundering and her rival reveling in adulation, Crawford turns to the bottle. She’s so soaked in alcohol, I worry about everyone lighting up cigarettes nearby.

After seeing Davis refer to the two of them as “old broads” with Jack Paar, Crawford drunk dials Davis and tells her curtly to stop referring to her as such. (In real life, Crawford had sent Davis a handwritten note with the same request.) Davis reminds her that half of the film’s success belongs to Joan, to which Crawford replies: “Well then I’d appreciate it if you would enjoy it half as much.”

The actresses aren’t the only ones struggling to capitalize on a post-Baby Jane bump. Bob Aldrich is itching for his next project, but Jack Warner tells him in no uncertain terms that he’ll never rise above B-level schlock. He tries to get him to do another flick with Davis, but Aldrich has his heart set on a Western or war picture.

Be careful what you wish for, Bob, because he gets a little bit of both. We see him working on his next film, indeed a Western, but he’s battling his star, Frank Sinatra. Feud paints Ol’ Blue Eyes as a petulant egomaniac. Aldrich really did have a miserable time working with Sinatra on 4 For Texas, but it’s interesting to see in this show’s contrext. Sinatra is every bit as difficult as Davis or Crawford, but with far less reason. Davis and Crawford were like animals backed into a corner, but Sinatra has the world at his fingertips. It’s the age-old perception of women as “bossy” (or, less politely “bitchy”), while a man making demands is just a “boss.” 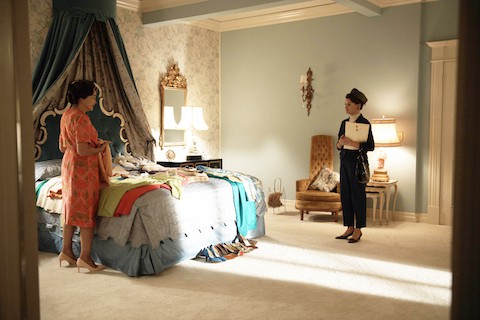 While Bob is wrangling the Rat Packer, his assistant Pauline has ambition of her own. She’s wrote a script for Joan Crawford called The Black Slipper (with a plot that sounds almost too similar to Showgirls), and she wants to direct. She recruits Joan’s maid Mamacita to help convince Joan to star. Jackie Hoffman’s Mamacita has been one of the brightest spots of this sparkling cast, and she’s given the spotlight here.

An immigrant herself, Mamacita appreciates America as a land of opportunity. She brings the script to Joan’s attention, but Joan isn’t quite as convinced women will be taken seriously behind the lens. She tells Pauline that she’s only got a few shots left to maintain her stardom, and she’s not going to waste one of hers on Pauline’s first go-round.

At least Bob has Pauline’s back. He recognizes how integral she was to finishing Baby Jane. He offers to read the script and consider producing. However, as Bob’s work with Sinatra devolves into chaos, he doesn’t have the patience to spare. Pauline catches him scribbling Sinatra’s notes on her script like it’s scrap paper, and he rips apart her glass ceiling shattering dreams (much like Warner did his hopes of doing great work).

Mamacita takes Pauline out for some pie, not to coddle her, but to deliver some truth. She’s been studying the census data in the library while Joan sleeps off her hangovers. She’s realized that women are on their way to overtake the majority of the population. That means more women will want more women’s stories, and who better to direct more women’s stories than more women? Change is coming to Hollywood, right? Right?!

They certainly aren’t making more room in the Best Actress Academy Award nominations. Joan wakes up on nomination day to find all the phones in her home off the hook. Mamacita instructs her to sit down, and from outside we heard Joan’s unhinged scream.

Next week’s ep is going to be a DOOZY, and it will cover one of the most brazen Hollywood snubs in history. If you’re not familiar with the Crawford/Davis debacle, get ready to get shook.

“Is the picture still running, because you two sound like a couple of old biddies?” – Pauline to Bob and the film’s editor

“I can murder, and smile whilst I murder.” – Joan Crawford

“You’re sitting around here getting pickled … like a herring.” – Jack Warner to Joan

“She can act rings around you, but your ass is nice and your tits aren’t sagging.” – Jack Warner to Joan

“The only thing impairing your ability is a fifth of vodka.” – Bette to Joan

Round 4 goes to: Bette Davis. Sure, Jack Warner threw the most savage shade, but if living well is the best revenge, Bette is doing it. She’s making the most with Baby Jane’s success, while Joan is just falling apart. For now.

Previous Post: « Rep. Devin Nunes Under Scrutiny for Whereabouts the Day Before His Breathless Trump Intel Announcement
Next Post: Elton John Turned 70 and Got a ‘Happy Birthday’ Serenade from Lady Gaga and Stevie Wonder: WATCH »