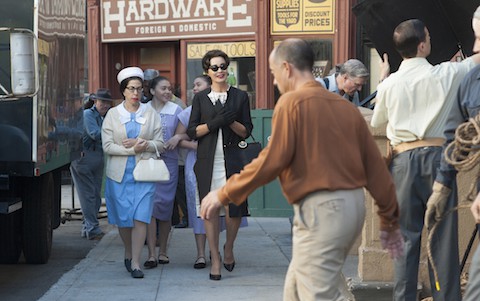 Well, that’s a wrap! Not on all of the premiere season of Feud: Bette and Joan, but at least on the filming of What Ever Happened to Baby Jane? We’re just three episodes in, and Bette’s and Joan’s days together on set are done, but their rivalry is far from over.

We were mercifully spared the diversion of Olivia de Havilland and Joan Blondell interviews to distract from the main narrative tonight, underscoring the fact that, while Hollywood sexism played a role in this battle, these two complex women were more than just victims of their time.

If you were hoping the episode title meant we’d get a glimpse of the unhinged “No wire hangers!” Crawford famously portrayed by Faye Dunaway, you’re missing the point. Even though Feud showcases Bette’s and Joan’s antics with savage glee, this is meant to be a much more nuanced, kinder portrayal of both women. Last night’s episode managed to pull it off.

We dish about all that went down in our recap below. After all, fellas, this ain’t my first time at the rodeo. 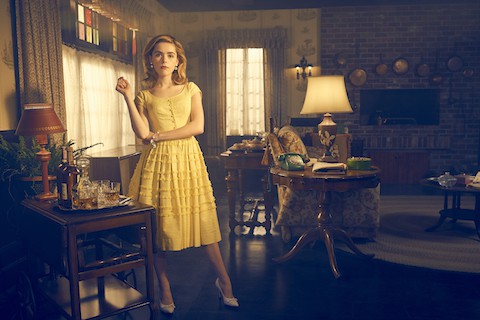 We begin with the children. BD is showing Joan’s kids how to smoke. No, it’s not CHRISTINA! or Christopher, but the twins Joan adopted in 1947. Joan, ever vigilant, catches them in the act, and the twins scurry away. (CHRISTINA! does get some acknowledgement when Mamacita suggests Joan send her a card and flowers for an upcoming performance. Joan initially refuses, but when the twins are out of earshot, she relents, signing the card “Christina Darling, I’m so Proud! Love, Mommie Dearest”)

While Joan’s minding the children, Bette is chatting with Bob about their little rendezvous in last week’s episode. She wants to be clear that, although it was a good time, it cannot happen again, and he agrees. While they’re chatting, Bette jokingly floats the idea that BD could play the neighbor girl, since she and Joan had run off the last one. Bob thinks it’s a great idea, and maybe getting a taste of her mother’s world could help BD and Bette’s relationship.

When Joan goes to confront Bette about BD and the girls smoking, Ms. Davis initially thinks she’s about to lay into her about her daughter playing the neighbor girl. She apologizes to Joan for BD acting inappropriately and invites Joan out for drinks.

The sight of Bette and Joan casually sipping on cocktails and puffing on their cigarettes together in the booth is lovely, even if their conversation takes a dark turn fast. Joan reveals her mother treated her terribly, sending her to school at a convent after she allegedly learned of 11-year-old Lucille sleeping with her second husband. Even Bette Davis is shocked. Moved by Joan’s honesty, Bette tells her, even if they don’t become friends, she wants to support her.

You’d think a moment like that would bring the women closer, and it does … for a moment. Joan is even reconsidering slamming Bette in Hedda’s column. Instead of feeding Hedda’s gossip about Bette’s body odor, she plants a story about Bette supporting her by removing herself from lead actress contention.

Of course, once Bette hears this, the short-lived truce is officially off. Instead, it’s all-out war. Bette takes every opportunity to undermine Joan’s confidence on set. Joan takes a more physical approach, ruining take after take of a scene in which Jane carries a lifeless Blanche across the room, forcing Bette to exert herself multiple times. As a cherry on top, Joan even wears a weighted belt. Hey, Bette’s got to get those reps in somehow. Bette gets a bit of revenge with that swift kick to the head we’ve seen in all the series’ promos.

Bette’s having better luck getting along with her other co-star, Victor Buono. She admires his work and invites him over to run lines. They share a great conversation wherein Bette proudly asserts “All the queens love me … The truth is I only really knew I’d made it once the female impersonators started doing me in their acts.” She briefly speaks to him about her other daughter, Margot, that’s living in a special school because she is severely brain damaged. Bette and Victor strike up an almost mother-son relationship, which comes into play a bit later.

Victor is cruising outside a gay theater. A young hunk mistakes him for Charles Laughton. (I can see the resemblance.) While Victor uses this as a chance to, um, get a taste of the young talent, the theater is raided by police. He uses his phone call to ring Bette, of course, and she comes running to get him out of the bind. She explains he’s merely researching for a role in a big Hollywood picture, and, since she is Bette freaking Davis, the cops obviously believe her.

She’s not having as much luck bonding with BD. It’s clear that Bette’s talent hasn’t rubbed off on her daughter (and, boy, if “terrible actress” isn’t the role Kiernan Shipka was born to play, I don’t know what is). Bette is obviously uncomfortable with BD’s performance, requesting she be credited as BD Merrill. When Hedda comes to confront Bette about how her daughter “stinks on ice,” Bette corrects her: “She doesn’t ruin the picture, her role isn’t important enough to do that.” Of course, BD overhears. In the end, BD apologizes for not doing better, and Bette does her best to comfort her with genuine praise (“You looked beautiful, and you spoke clearly. You hit your marks, you didn’t look into the lens once, not once.”) without coddling.

Back at Crawford’s house, the twins are off at camp, and Joan is feeling the pangs of her nest being empty once again. Unfortunately, when she tries to adopt another child, the agency tells her she’s too old. Can’t women over 40 do anything in this town?

The final scene of Baby Jane is filmed on a beach, and Joan is at peak bad behavior. She shows up late and drunk (actions she’ll later attribute to Davis in her retelling to Hedda), and she insists on pulling her face tighter and tighter until she looks decades younger. Just to rub sand in her obvious wounds, she overhears Bob remark how Bette looks so much younger just because of her fantastic performance. 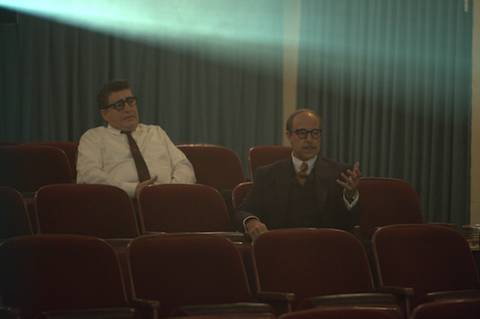 All Joan’s fussing was for nothing. Once Jack Warner sees the dailies, he doesn’t buy Joan looking so fresh on her deathbed. He demands a reshoot, which Bob manages to recreate using a sandbox in the studio.

With their final scene shot, Bette and Joan walk out of their respective dressing rooms, exchange knowing glances — maybe even some mutual respect — before heading toward opposite exits.

But not before Bette ashes her cigarette in Joan’s Pepsi machine, just for good measure.

“We’ll see how her reviews are, and then we’ll think about sending flowers.” – Joan Crawford on CHRISTINA!’s upcoming performance.

“Christ, I didn’t even get a tingle ’til I was 25, and then I waited another two years before I did the deed, and that was on my goddamn honeymoon.” — Bette Davis reacting to Joan losing her virginity at 11.

“I’m sure his Falstaff is the talk of Tijuana.” — Bette Davis’ initial thoughts on Victor Buono.

“Where’s your wheelchair … because you’re going to need it after I break your goddamn legs.” — Bette Davis reacting to Joan suggesting she take herself out of the running for the Lead Actress Oscar.

“It was Gloria Swanson who was robbed in 1950, not youuuuuu, bitch!” — Joan Crawford with the line of the night.

“If I were the director i’d tell you to do it again and again until it was convincing.” — Bette Davis undermining Joan’s confidence on set.

“That face, right into camera. This really is a horror picture.” — Joan Crawford watching Bette work.

“All those years of alcohol abuse have exacted a terrible price.” — Joan Crawford to Hedda.

“I’m not falling on those. I don’t do stunts.” — Bette Davis on Joan’s falsies.

“If crawford couldn’t ruin the picture, no one could.” — Bette Davis comforting BD.

Round 3 goes to: Bette Davis. Maybe we’re biased, but the gays-loving Davis is battling it out with a touch more class than Joan. Crawford’s getting messy, while Bette is always razor sharp.

What was your favorite scene from last night’s episode of Feud?