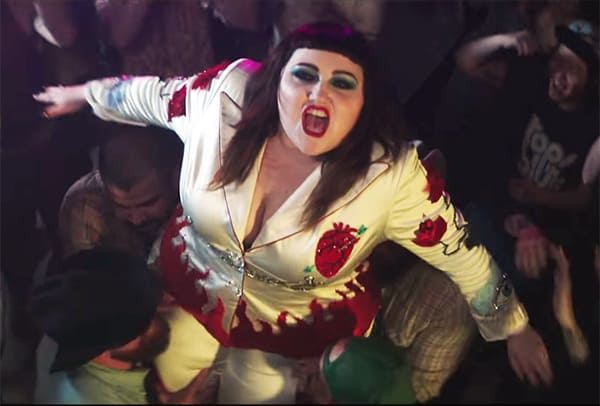 Former Gossip frontwoman and LGBTQ artist Beth Ditto has launched the video for lead single ‘Fire’ in advance of the release of her first full-length solo album Fake Sugar, slated for June 16.

Ditto made a name for herself as a brassy, larger-than-life singer for the dance-fueled post-punk revival band, whose celebrated run began with an eponymous EP and tour alongside Sleater-Kinney in 1999, included the breakthrough 2006 Standing in the Way of Control, and culminated with 2012’s final outing, A Joyful Noise. They officially parted ways last year, leaving Ditto to pursue her solo output and fashion projects. Along the way, Ditto married girlfriend Kristin Ogata at the close of 2014.

The video features a well-choreographed saloon showdown set to a pulsing beat and purring vocals, with a luminescent Ditto presiding. Fake Sugar represents a two-year creative effort for her, reports Rolling Stone:

Ditto said she spent two years writing nearly 80 songs for her solo album, including some tracks written with producer Jacknife Lee. However, her main collaborator on Fake Sugar was songwriter and producer Jennifer Decilveo. “She was the rollerblades to my roller skates. We’d argue all day long and I loved it,” Ditto said of the collaboration in a statement.

In addition to album opener “Fire,” the 12-song LP also features a cut titled “Go Baby Go” that serves as a tribute to late Suicide singer Alan Vega. The singer’s 2014 marriage to her longtime girlfriend also informed Fake Sugar‘s lyrics. “This is adulthood, baby,” Ditto added. “You fought for marriage equality, now you gotta live in it.”

Previous Post: « Oklahoma LGBT Kids Left Traumatized After State Capitol Staff Warned ‘Cross-Dressers Are In the Building’
Next Post: This New Cocktail Bar Will Donate 100% of Profits to Causes Under Attack by Trump »