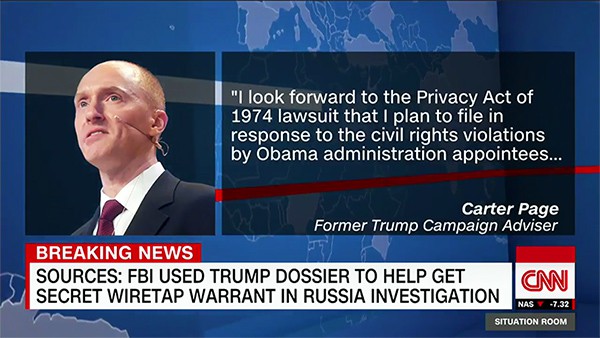 The warrant was issued to the FBI last summer by a Foreign Intelligence Surveillance Court judge due to probable cause that Page was working as an agent of a foreign power, namely Russia. The dossier made headlines earlier this year for some of its more salacious details pertaining to compromising information Russia is alleged to have gathered on Trump:

The dossier is a collection of memos compiled by a former British intelligence operative working for political opponents of Trump. The memos purport to describe efforts by Russian intelligence to gather compromising information on Trump. CNN reported earlier this year that both President Obama and then-President Elect Trump were briefed on the dossier’s existence in part to ensure that Trump understood what was being circulating among intelligence agencies investigating the dossier, and also to emphasize that Russia sought to compile information damaging to Republicans and Democrats. US investigators say they have corroborated some aspects of the allegations, particularly the conversations between foreign nationals that took place as described in the reports.