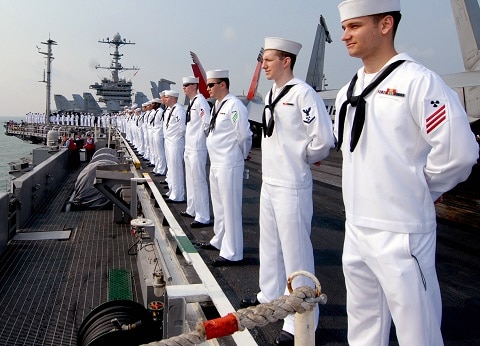 An interim revision to Navy regulations has made posting nude pictures of service members without consent a crime in the Navy and Marine Corps.

The new regulations come following a photo-sharing scandal that surfaced when a reporter outed a private Facebook group of Marines and sailors that was used to swap nudes.

Three conditions that will be considered a violation of Navy regulations are detailed: “with the intent to realize personal gain; with the intent to humiliate, harm, harass, intimidate, threaten, or coerce the depicted person; or with reckless disregard as to whether the depicted person would be humiliated, harmed, intimidated, threatened, or coerced.”

An intimate image is defined as “any visual depiction, including by electronic means, that includes another person who is identifiable from the depiction itself or from information conveyed in connection with the depiction; depicts that person engaging in sexually explicit conduct or depicts the private area of that person; and taken under circumstances in which the person depicted had a reasonable expectation of privacy.”

The new regs, which were signed off by Acting Navy Secretary Sean Stackley, go into effect immediately. It is characterized as interim until the next edition of Navy regulations is printed.

The changes were made public Tuesday in an all-Navy message, a move that some experts think will be hard-pressed to defend in court. Changing Navy regulations is a bit of an end-around for making changes to the Uniform Code of Military Justice, which would require an act of Congress.

In this case, detailing expectations of Department of the Navy personnel amounts to a lawful order, which can be enforced with the full weight of the justice system, from non-judicial punishment to general court martial. Sailors and Marines who run afoul of the new regs could be charged with an Article 92, failure to obey a lawful order, the Navy’s chief spokesperson confirmed in a statement.

“The addition of Article 1168 ‘Nonconsensual distribution or broadcasting of an image’ to Navy Regulations serves to underscore leadership’s commitment to eliminating degrading behaviors that erode trust and weaken the Navy and Marine Corps Team.

“It provides commanders another tool to maintain good order and discipline by holding Sailors and Marines accountable for inappropriate conduct in the nonconsensual sharing of intimate imagery.

“This article adds the potential charge of Article 92 ‘Failure to obey [an] order or regulation’ to the possible charges that can be used against an alleged perpetrator. Each case of alleged misconduct will be evaluated on its own facts and circumstances.”

However, Brian Bouffard, a former Navy JAG and now private defense attorney, said that much of the language in the new regulations would be very difficult to prove in court.

“Prosecuting these types of cases,” he claimed, “will probably require a witness to testify that they were either humiliated or harmed, etc., for the government to make an effective case.”