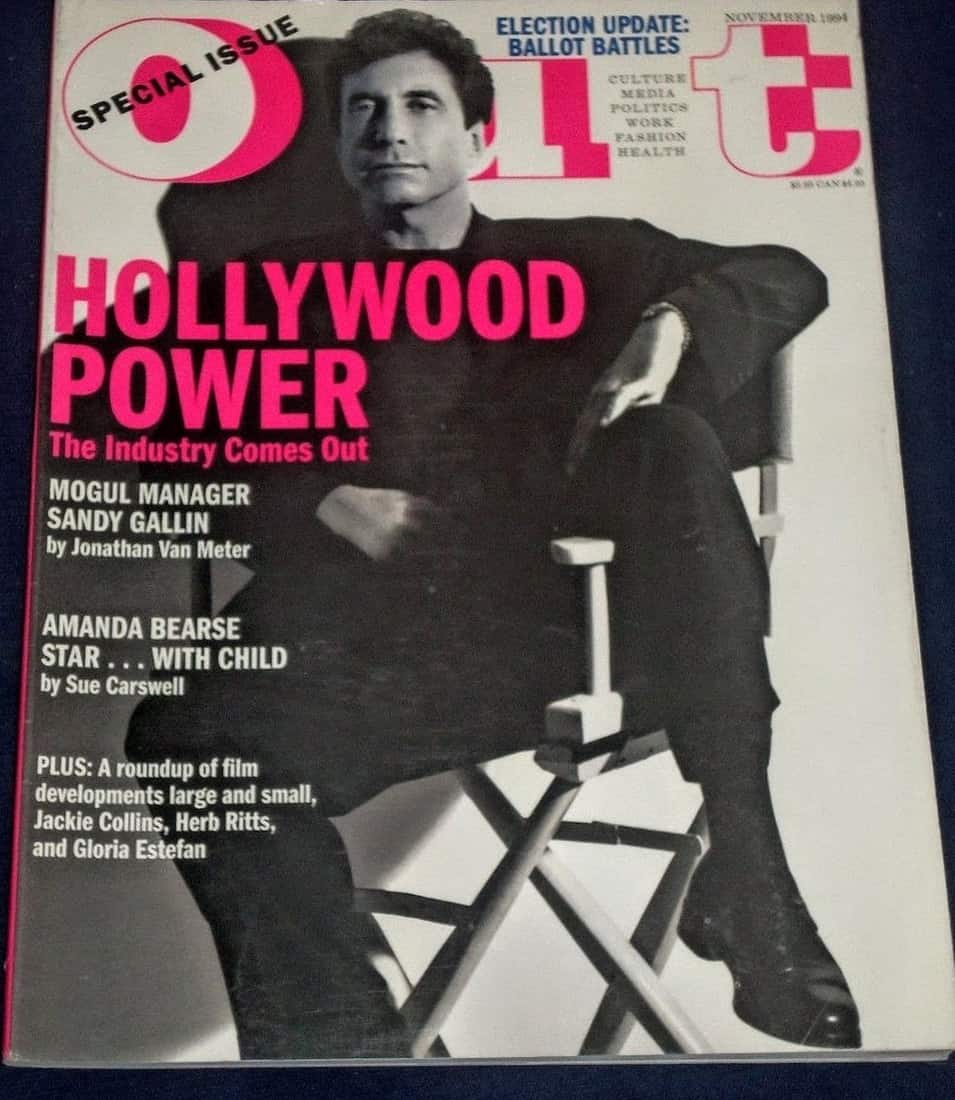 My thoughts go out to legendary Sandy Gallin, under renewed attack by blood cancer in the ICU at UCLA Medical Center and that he can tap some of the same strength and confidence he’s shown in life so far. I don’t know him well, but we crossed paths for a while in the 90s including some memorable times at events, the beach, and getting to help his “roommate” Dolly Parton put her shoe at the top of the Christmas tree in their New York apartment while there for drinks with a friend.

Author Kevin Sessums knows him well and describes him as “kind and kinda kooky and crazy talented.” For a long time one of, if not “the”, top managers in Hollywood with a client list that has included his roommate, Cher, Neil Diamond, Barbra Streisand, Mariah Carey and Michael Jackson. He later segued into his current career as a successful real estate entrepreneur and designer.

I’m still thankful for his support in what turned out to be our naive decision to do a Hollywood Power issue at Out in 1994. Sandy ended up the ONLY one on our target list who would be featured in the issue. He just said “Yes” and joked in the interview that in addition to getting to be a role model, he might find a boyfriend. If only because of how many others didn’t do it, this was brave thing at the time.

And it was great for the magazine. We featured legit Hollywood power on the cover, and in true manager fashion, Sandy arranged for a friend to shoot the cover…and that friend happened to be Herb Ritts. (Who we included in the following issue launching the first Out 100 list.)

Jonathan Van Meter of Vogue and Vibe did the interview and Sue Carswell of People landed a competitive Amanda Bearse interview. The supporting star of Married With Children had recently come out and it’s a sign of the times that it was big news.

SANDY GALLIN  ended up the ONLY one on our target list who would be featured in the issue.

At that point not a single Teen Wolf was out. I didn’t know Dougie Houser’s real name. And though Ellen came out 20 years ago today and was treated poorly by the industry for years, that was three years after this cover. It would be another 4 years before George Michael came out and another 16 years for Ricky Martin. David Geffen, Clive Davis and Anderson Cooper? NopeWe had a hard time finding cover subjects each month.

There were, of course openly gay folks in the industry  working outside the mainstream system, many because of the homophobia. And we covered them in this issue and others. Happily many of those, and others early in their careers back then are among the most successful, respected, and powerful in the industry. Alan Poul, Alan Ball, Howie Klein, Christine Vachon and others were doing significant not really part of the Hollywood system. And a  generation, slightly younger, my contemporaries, including Bruce Cohen, Nina Jacobson, Ryan Murphy, Randy Barbato, Fenton Bailey, Stephen Friedman and others were just getting past entry level, and were starting to make names for themselves

Diving into this cover, Sandy Gallin supported our start up, and had a message for those blazing the trail on their own terms, that they should keep going, that things were changing, and to feel some encouragement. I hope he finds whatever strength and other support he needs now.

i am Michael Goff, Andy Towle’s business partner in Towleroad. I was was founder and Editor-in-Chief of Out magazine for much of the 1990s. I initially put this out there as a Facebook post.

Previous Post: « Joe Biden: ‘I am Disgusted and Appalled’ by Reports of Torture and Murder of Gay Men in Chechnya
Next Post: YouTube Superstar April the Giraffe Has Finally Given Birth: WATCH »