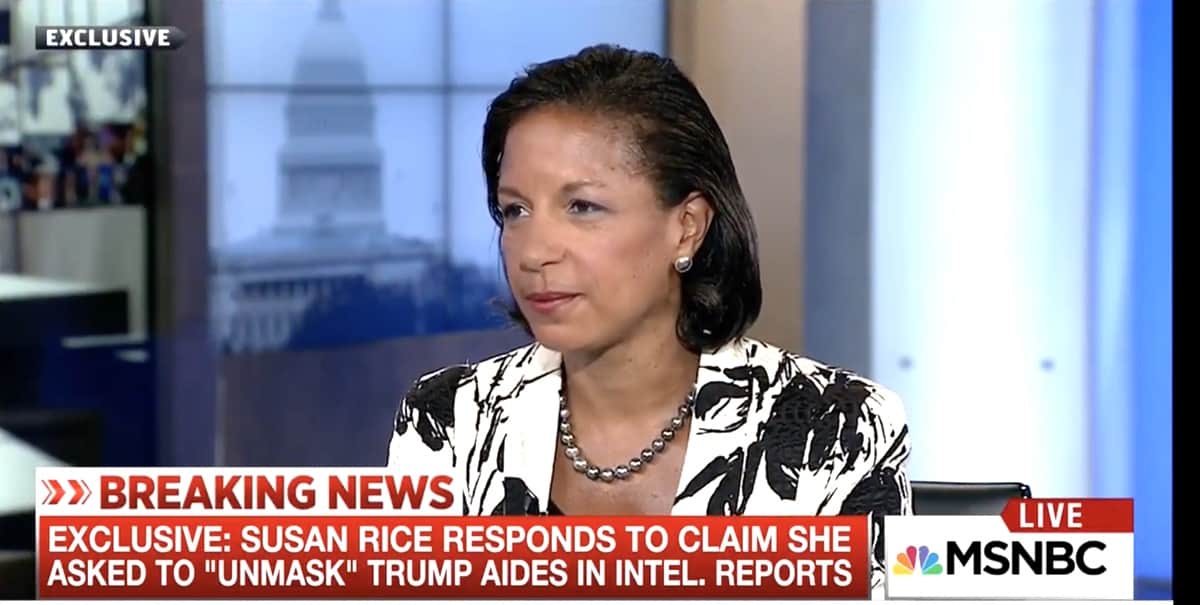 Former national security adviser Susan Rice told MSNBC’s Andrea Mitchell on Tuesday that while it was sometimes necessary to unmask certain individuals in intelligence reports, it was not done for political purposes.

The intelligence reports being referenced were classified documents suggesting that Donald Trump or his aides were captured in incidental surveillance. In a breach of protocol, Nunes relayed that information (information he had received from the White House in the first place) to Trump before telling members of his committee, with whom the intel was finally shared last week.

Rice’s appearance on MSNBC to defend herself was the result of a successful ploy by Trump to turn the conversation away from the investigation into the Trump campaign’s links to Russia and instead focus it on the Obama administration and allegations that Trump had been surveilled.

The Atlantic notes that there is nothing illegal about what Rice did:

One possibility is that Rice was acting in connection with a joint investigation into Russian meddling in the election. The government had already concluded, based on the assessments of multiple intelligence agencies, that Russia was meddling in the election. There were also ongoing investigations into potentially illegal behavior by Trump staffers. Paul Manafort, Trump’s former campaign chairman, was reportedly already being examined for his contacts with Russia, as were other Trump aides, current and former.

A second possibility is that it was simply the course of business to try to figure out what foreign governments were thinking. If foreign officials were seeking to shape U.S. policy or get a leg up, intercepts could have been useful to the national security adviser, and Rice might have wanted names unmasked to make those intercepts intelligible. It is still not clear whether Trump transition team officials were directly incidentally collected (i.e., they were in conversation with surveillance targets) or indirectly collected (i.e., they were mentioned during conversations between a third party and surveillance targets, and then masked).