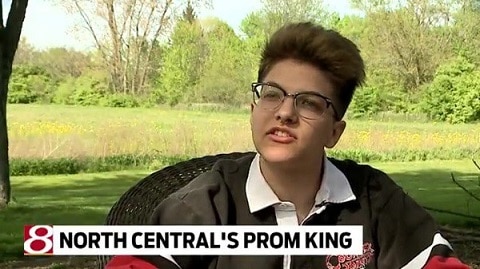 “I wanted young kids at my school, who are trans or maybe gay or just coming into their identity, to know that being LGBT doesn’t have to be a cripple and that being LGBT is something that you should be proud of and you should represent.”

“It’s kind of a bittersweet thing being the first person because it’s great that there finally is a first person, but the fact that it’s happening so late can be disappointing.

“Being trans doesn’t have to be something that’s so taboo. Being open about your identity is such a wonderful thing and it helps grow confidence and helps people be happy for sure.”

Although the majority of his fellow students were supportive, school authorities are investigating a report that one of his fliers was damaged.

Watch the WishTV report below.