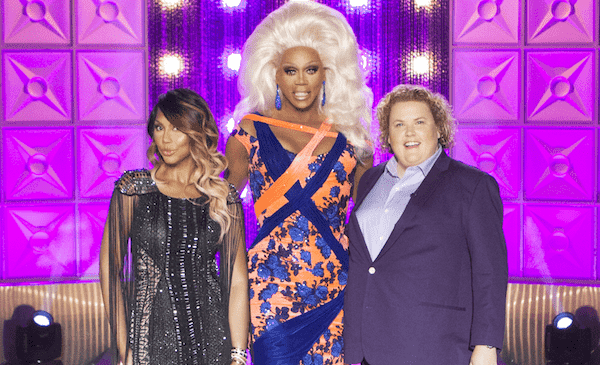 We all know the old saying: Comedy equals tragedy plus wigs, and last night’s episode of RuPaul’s Drag Race certainly had plenty of both. It’s just that some girls pulled off one better than the other.

It all started with the traditional reading mini-challenge in the workroom. Ru opens the library, but, honestly, it doesn’t feel like any queen really reigns supreme. They show at least one decent joke from each gal, but certainly no one rises to the level of, say, any of the season 6 queens’ reads.

Valentina gets the win, but, more importantly, Alexis ends up offended by some jokes about her body from the likes of Nina and Farrah. On the one hand, I totally get it. Lots of gay guys have issues about their bodies (including, full disclosure, myself), and the idea of being read or roasted for sport legitimately terrifies me. That’s why I only say mean things about people on the internet and not to their faces!

However, the reading challenge is an integral part of this show, as Alexis, who has auditioned over and over for years, is well aware. And more importantly, Alexis should know Ru’s feelings about being oversensitive. An important part of Ru’s whole brand is the notion that the ego is inherently ridiculous, and nothing should be off limits. It’s a personal philosophy that’s been problematic for the legendary queen in the past.

And beyond that, it’s not like Alexis’ reads were much gentler. She called Farrah a whore, and she ripped on Shea’s teeth. I’m unclear why a dig at someone’s teeth is any different than a dig on their weight. The whole situation just made Alexis look terribly tone-deaf.

This week, our very special emotional moment focuses on the plight of LGBTQ people in Russia. Peppermint shares a story of being detained at the airport for her gender not matching her ID, and Sasha chimes in with some of her experiences living in the former U.S.S.R. Of all these very special moments, this one felt particularly rushed.

The main challenge is the RuPaul Roast, but Mama Ru isn’t the target: Michelle is. It’s a perfect twist. Michelle provides a wealth of easy material — she’s a whore! she looks ridiculous! she’s a D-list celebrity! she’s from Jersey! — and she’s much more intimidating than warm, joyful Ru.

Joining the panel this week are Fortune Feimster, Tamar Braxton and a live audience. Peppermint, Shea and Sasha shine. Trinity struggles with a country-bumpkin character. Farrah has plenty of insults, but no jokes. Alexis has jokes, but they’re all bad, which I think is worse.

Farrah and Alexis land in the bottom two, and they lip sync to one of my personal favorite songs, “Baby I’m Burning” by the iconic Dolly Parton. (As an aside, the best part of the whole episode was RuPaul pantomiming the laser sound effects in the track. Someone please find me that GIF ASAP.)

After weeks of languishing in the bottom, Farrah is sent packing.

Where does that leave the ladies? Let’s discuss their standings in our rankings below.

1. As she reminded us early in the episode, Shea has yet to land in the bottom all season. She turned in another strong performance last night, delivering a competent roast. I would be shocked to see her not make the top three.

2. Honestly, I have no idea what Valentina was doing during that roast. Was it a character? Who cares! I loved it, and I love her, and there’s nothing short of tearing up a photo of Erika Jayne a la Sinead O’Connor that will change my mind at this point. I think Ru feels similarly, having arbitrarily awarding V the win of the mini-challenge despite not displaying any real dominance. No matter what she’s doing, Valentina is a delight.

3. I sincerely want to hear Tamar Braxton explain why Sasha’s outfit worked with her being analytical. Was that a very analytical hat? Does she maybe not know what analytical means? Either way, like Ross, I was once again pleasantly surprised with Sasha’s self-aware approach to the challenge. She is a true talent and an icon in the making, but I’m just not sure she has the CHARISMA to win this whole thing.

4. Trinity and Peppermint are neck-and-neck for me. Peppermint definitely out-performed Trinity in the challenge this week, but I still feel like Trinity might have the edge to pull into the top four. I get what she was doing tonight with the character. She was obviously trying to pull a Coco Montrese, but she would’ve been funnier just getting up there and being her ridiculous, bitchy, Trinity self.

5. Thank goodness for Peppermint. That roast was getting bleak, y’all. She fired off a slew of great jokes delivered in a classic roast style. I’m so glad we’re getting to see Peppermint do what she does so well. I don’t think she’ll make it in the top 3, but top 4 isn’t out of the question.

6. Like Trinity, Nina opted to do a character. And, like Trinity, it wasn’t nearly as good as the Coco Montrese touchstone. Coco’s character made sense in the context of the roast; it was a direct reference to Ru’s roots. What was the purpose of this character here? Her “BMW: Body Made Wrong” read in the mini-challenge felt ripped from a novelty T-shirt at Spencer’s Gifts or a keychain at a boardwalk.

7. Ugh, Alexis. Regardless of her survival tonight, she really sealed her fate. One of the worst things you can be in the eyes of Ru is humorless. She decked herself out in green for the sake of one throwaway joke, so it ended up being more of a distraction than anything else. Add to that the reemergence of that awful Subway Fish voice, and it all leaves quite the bad taste. Alexis has become a bit of a monster on Untucked, and I actually think she stands to lose more fans the longer she kicks around.

8. Finally, Farrah has left the building. I never hated Farrah, nor do I think she’s a “bad” drag queen. She’s just young, and having this experience is only going to make her stronger. Was I surprised she tanked this challenge? Not at all. Was I impressed with how spectacularly she failed? Sort of! It was so strange and off, it almost felt like performance art. I want to add the sound of her awkwardly sighing to my summer playlist.