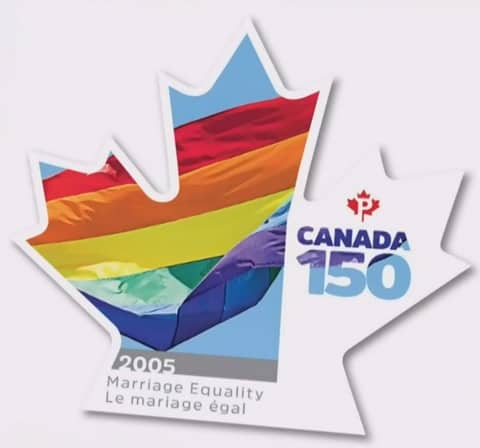 As part of Canada’s 150th birthday celebrations, the agency unveiled the stamp on Tuesday at a LGBT community center in Toronto.

The maple-leaf-shaped stamp shows an image of a rainbow flag and the words “marriage equality” in both French and English.

It says the day in 2005 when same-sex marriage became legal across the country is one of the milestones that have shaped Canada.

The stamp will be available on June 1st.

Our 4th #Canada150 stamp commemorates the 2005 passage of the Civil Marriage Act, which made marriage equality the law throughout Canada. pic.twitter.com/915AE8ETqF

Previous Post: « A Funny Thing Happened On the Way To The Runway On ‘Drag Race’ [RECAP]
Next Post: SNL’s Melissa McCarthy Returns as Desperate Sean Spicer, Tooling Through NYC: WATCH »