You bring stuff into the movie theater with you. I’m not talking about snacks though that’s a frugal and smart thing to do given concession prices and the inherent tastiness of things you aren’t supposed to be eating. My point is this: we come into each movie with our own baggage, nothing existing in a vacuum.

Angry internet types like to call this “bias” when they disagree with anything but it’s just human nature. We all have our predilections. I share this because I walked into SNATCHED, Amy Schumer’s latest with Goldie Hawn in her first movie in 15 years (!!!) wanting to love it.

Him: “Into…?”
Me: “Actresses of a Certain Age in Comeback Vehicles.”

Some other mitigating factors: I am also a crazy cat lady and Goldie Hawn plays one in the movie, Amy Schumer generally makes my cheeks hurt from laughing, and I still LOL whenever I remember that walk of shame bit from Trainwrecked in high heels on a busted Staten Island sidewalk.

[SIGH] But wanting to love and loving are different things… 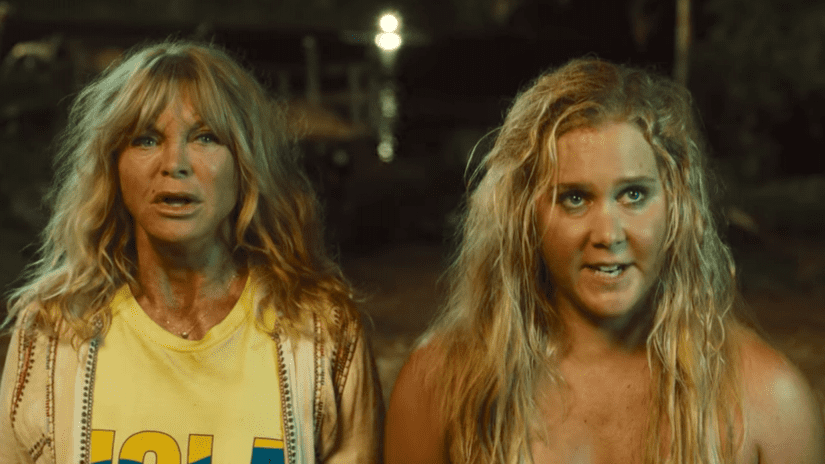 As you may have surmised from the double entendre movie title, the plot can be easily summed up. Snatched. Girls! Getting kidnapped! The ladies in question are clueless narcissist Emily (Amy Schumer) and her homebody mom Linda (Goldie Hawn). Linda reluctantly accompanies her daughter to Ecuador because Emily has been freshly dumped by her musician boyfriend (Randall Parks from Fresh Off the Boat, giving the movie its best “pussy” joke of many) and the tickets to the trip are non-refundable.

At the very least, Linda figures, she’ll get quality time with her daughter. Shortly after their arrival the pair are captured by bad guys looking for ransom money in such a roughly edited way you know the movie doesn’t care about the details. (Or even about looking good. It’s one thing to rough up your stars comically and hand them self-deprecating material but to consistently shoot them in such unflattering ways?)

The remainder of the film after the title event is a series of mild comic episodes in which the mother/daughter duo perpetually escape being murdered (We could type “spoiler” but you know this is a comedy not a tragedy, right?). Their best bet at survival might be fellow American travelers, the paranoid Ruth and Barb (Wanda Sykes and Joan Cusack) or mysterious know-it-all rogue Roger (Christopher Meloni). Pro: All the stars in Snatched are naturally funny actors. Con: They’re deployed in such a way that they’re all left to their own devices to amuse us.

You can be ready to laugh but if the jokes don’t come, where do you put your own laugh track?

A perfect example may well be Goldie Hawn’s cat lady intro. It’s more concept than actual joke and not a fresh one. Haha a single woman who is too devoted to her cats. Get it? Aside from one inspired visual gag involving her time in a sculpture class, the joke doesn’t go anywhere and is promptly dropped. There’s no reference to the cats again.

In one scene late in the movie Linda’s agoraphobic live-in adult son (Ike Baronholtz), exits their house with grand ideas about traveling to Ecuador himself to rescue them. He leaves the door wide open despite no return date.

Director Jonathan Levine (Warm Bodies, 50/50) shoots this bit with absurdly broad slo-mo to amp up the comic courage but I couldn’t laugh. Because, excuse me, WHAT ABOUT THE CATS? Who will feed them? Will they run away? Why doesn’t Linda ever ask about them after leaving on vacation? Why doesn’t Linda ask about them when she sees her son? This is not the behavior of a crazy cat lady. I know from crazy cat lady. 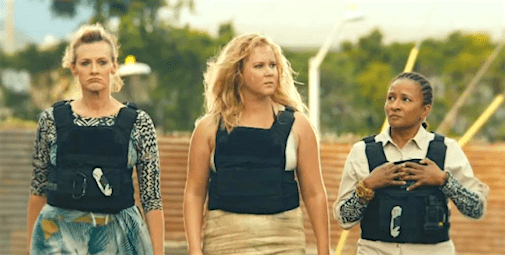 There are so many opportunities to tie all the single scene and character jokes together for a fuller comic pleasure and Snatched just keeps missing them all, content to just let the stars ad-lib or find ways of creating jokes where none exist on the page. The best example of this is Ruth’s out-of-nowhere, pointed, and surely ad-libbed reference to herself and Barb as  “platonic friends” . It’s funny only because Wanda Sykes is hilarious and a known Gay and because the screenplay never explains who Ruth and Barb are but they’ll seem like a married couple to every single gay person watching.

If you’re content to LOL whenever funny actors are just being themselves, Snatched will be a swift if forgettable good time. It’s only 90 minutes long — like comedies should be! But if you’re looking for jokes, be warned: Snatched will abandon you as carelessly as it does Linda’s cats, and as lost as Emily in the jungle.

Previous Post: « Katy Perry Gets Boiled Basted, Steamed, and Chopped in the ‘Bon Appetit’ Video: WATCH
Next Post: A Funny Thing Happened On the Way To The Runway On ‘Drag Race’ [RECAP] »