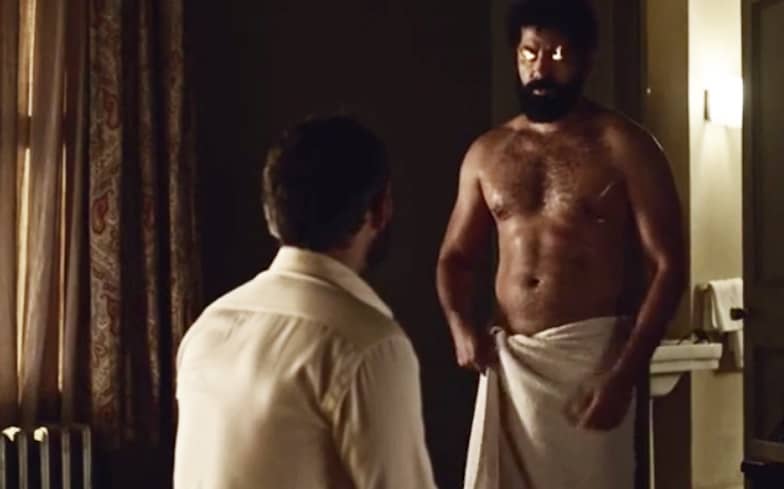 The series American Gods has aired what some critics have called “the single hottest and most pornographic gay sex scene ever put on mainstream television.”

As Towleroad’s Adam Rhodes reported earlier this month, the new series, adapted from Neil Gaiman’s 2001 novel of the same name, tells the story of a battle between old and new gods in an American setting and features a steamy sex scene between Omid Abtahi, who plays a young Muslim man named Salim living in New York, and Mousa Kraish, who plays a spiritual messenger, or jinn, disguised as a taxi driver.

Check out some (work-unfriendly) stills from the scene HERE.

Abtahi, Kraish and Executive Producer Bryan Fuller sat down with Entertainment Weekly to discuss the episode.

The scene (directed by Guillermo Navarro) marked Kraish’s first-ever onscreen kiss and sex scene; coincidentally, it marked Abtahi’s second, as the actor played another gay character named Salim on Showtime’s 2005 series Sleeper Cell. Both actors have been friends for a decade, which they say aided their experience during shooting, and fans of Gaiman’s novel. But more importantly, they laud the filmmakers and Gaiman not just for the beauty of the eroticism, but for the representation onscreen.

“This was my first time seeing it complete, and it was beautiful and everything that I expected it to be… but sex scene aside, just seeing two Middle Eastern men represented in that way, with humor and love and joy…it’s taken me eleven years to get to that,” said a visibly emotional Kraish. “And I want to see more of that.” (Narratively, viewers will, as this is just the beginning of Salim and the Jinn’s story in the series; in the book, this scene is their only appearance.)

Abtahi confessed to nerves ahead of watching the scene with his wife. “I just felt, ‘God, I hope it’s not raunchy.’ And when I did see it and saw how it was shot and the music and the slow motion and the attention to detail and [Mousa’s] eyes, it was just so f—ing beautiful. I’m so proud to be a part of it.”

Fuller wanted the scene to be realistic, and it wasn’t in the first cut.

Said Fuller to Vulture: “I was like, ‘Okay, unless he has a 12-inch, candy-cane cock and can fuck around corners, his dick’s not getting in him. So you guys need to go back and figure out where holes are.”