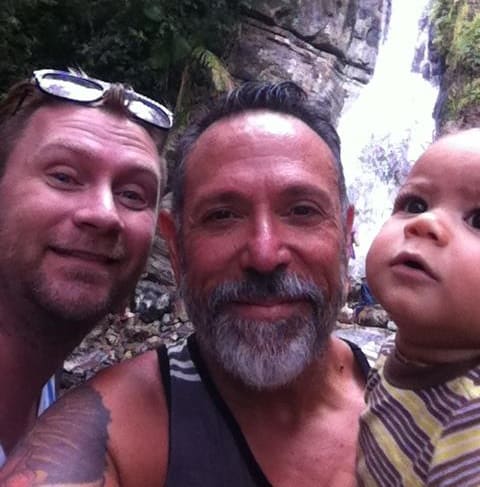 A gay man from North Carolina says he is devastated after a United Airlines flight attendant accused him of inappropriately touching his son’s genitals.

Henry Amador-Batten (above center) was flying to North Carolina with his five-year-old son Ben when a flight attendant made the accusation.

Henry Amador-Batten, a gay father flying to his North Carolina home, was accused by United flight attendants of… https://t.co/WTGIA4s92g

Amador-Batten, who was returning home from a family visit in Puerto Rico, said he was caught completely off guard by the accusation, but cooperated with police. He said he explained to the officers that Ben was afraid of flying, and he’d simply placed his hand on his son’s lap to comfort him as he fell asleep. Meanwhile, Amador-Batten’s husband, Joel, waited for the pair outside of airport security as the ordeal unfolded.

In the end, Amador-Batten was not charged with a crime and released. However, he told HuffPost that both he and Ben remain traumatized by the experience. “That flight attendant’s false accusation did not save a child, it put an entire family in danger,” he said. “We’re [made to] understand that families like ours, created out of choice and love, are fragile by nature. … We are not as protected nor solidified, and we need to be.”

United has no idea who they’re messing with!!! We will not keep quiet while you conduct your internal investigation, we will not give anyone the benefit of the doubt when it comes to protecting our family from accusations of things as disgusting as pedophilia, and my husband and I will continue to use our own voices, amplified by the love and support of the massive community that you are all a part of, to shout as loud as we can that an individual who is the face of a company, and therefore of its standards and practices, cannot just accuse someone of something so dreadful as child molestation without any sort of investigation.

Henry said that an apology he received from United Airlines was “empty and hollow.” The couple, who are in the process of adopting a second son, have hired an attorney and are now planning to seek damages.

“Based on the horrible situation that they placed him in front of their son and other people on the plane, we are going to vigorously pursue to be compensated by the airline for this horrible embarrassing treatment.

“To have your young child see you be stopped by the police and be questioned like you have done something wrong based on nothing would cause any traveler to be mortified. That type of emotional distress and improper persecution of one of their customers based off zero evidence needs to be rectified.”

Henry said that the ordeal has been especially difficult for Ben. “The most painful part of this continues to be how this affected my son, and how it may continue to,” he said. “He’s not been sleeping well, refusing to sleep in his own room and just wants to be by his daddies.”

Last month, United Airlines came under scrutiny when a passenger was filmed being violently dragged off one of their planes.

Watch an interview with the couple below.