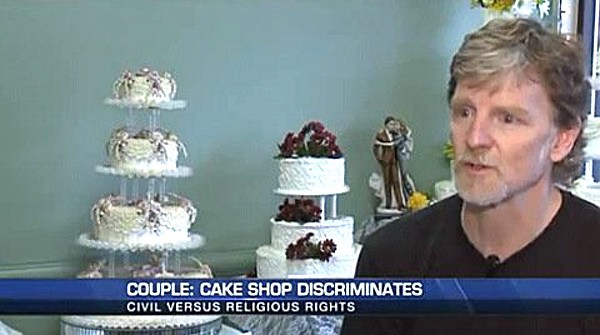 On Monday, the Supreme Court granted a writ of certiorari in Masterpiece Cakeshop v. Colorado, a case in which a Denver bakery refused to bake a wedding cake for a same-sex couple on the grounds that same-sex marriage violates the baker’s personal religious beliefs.

The case raises questions about the scope of the First Amendment’s Free Exercise of Religion clause and the reach of state anti-discrimination and public accommodations laws. It also offers an opportunity for the Court to either reaffirm its commitment to Obergefell and LGBTQ equality or carve out a donut hole so big that would make marriage equality meaningless. There are high stakes involved in Masterpiece Cakeshop, and it has the potential to set the tone for LGBTQ rights for some time.

In July 2012, Charlie Craig and David Mullins visited the Masterpiece bakery in Lakewood, Colorado, and requested that its owner, Jack Phillips, create a cake to celebrate their same-sex wedding. Phillips declined, telling them that he does not create wedding cakes for same-sex weddings because of his religious beliefs. He did volunteer to sell them other baked goods, though, but none having anything to do with their gay wedding.

At the time, Colorado did not recognize marriage equality. But the state, like every other state, has what we call public accommodations laws. These laws make clear that if you own or run a public-facing business, that is, where you invite in members of the public to buy your goods or services, you cannot discriminate against them on the basis of race, religion, national origin, gender, or sexual orientation. So, Mssrs. Craig and Mullins filed a claim with Colorado’s Civil Rights Division alleging discrimination on the basis of sexual orientation in violation of Colorado’s anti-discrimination laws.

No one argues about the facts. Mr. Phillips admits that he discriminated against Craig and Mullins. He just argues that he has the right to. Specifically, he suggests that the First Amendment Free Exercise Clause guarantees him the right to pursue his religious beliefs as he sees fit, and one of his religious beliefs is that gay marriage is wrong. Religious freedom to Mr. Phillips means the freedom to discriminate.

Too many persons of faith agree with him. But the law of the State of Colorado does not. The Civil Rights Division sided with Craig and Mullins.

It is a discriminatory practice and unlawful for a person, directly or indirectly, to refuse, withhold from, or deny to an individual or a group, because of . . . sexual orientation . . . the full and equal enjoyment of the goods, services, facilities, privileges, advantages, or accommodations of a place of public accommodation . . . .

In order to win a discrimination case, a plaintiff has to prove that “but for” being part of a protected class of persons (in this case, gay), the service would have been rendered. That is exactly what happened in this case. Masterpiece makes wedding cakes for opposite-sex couples, but it won’t do the same for same-sex couples. That’s discrimination on the basis of sex and sexual orientation.

Phillips argument in response is pretty hard to swallow. He said he was happy to sell baked goods to gay people. So, he isn’t a bigot. Rather, he refuses to sell them baked goods to be used as part of a ceremony that violates Phillips’ religious beliefs.

This argument rehashes old theories. Some people used to argue that it may not be ok to discriminate against someone on the basis of his or her status, i.e., as a gay person, but it’s totally fine to discriminate against someone for his or her actions, i.e., marrying a person of the same sex. But the Supreme Court has said numerous times that there is no daylight between status discrimination (again, for being gay) and discrimination on the basis of activities closely associated with that status (like engaging in same-sex intimate relationships, having sex with someone of the same sex, or marrying someone of the same sex, and so on).

It is pretty clear that Masterpiece’s and Phillips’s arguments should go nowhere. The Supreme Court has made clear where it stands.

But this is only true if the Obergefell majority holds.

As we saw yesterday, at least three conservative justices — Thomas, Alito, and Gorsuch — are itching to destroy Obergefell by absurdly narrowing it, making it meaningless. That Chief Justice Roberts, who joined the dissent in Obergefell, sided with the Obergefell majority in the Arkansas case has suggested to some that he thinks the matter is done, decided, and not to be challenged.

That’s wishful thinking, especially since Roberts wrote a lengthy and powerful (if discriminatory) dissent in Obergefell. The decision in Pavan was “per curiam,” or “by the court,” which lets individual justices hide their true feelings. More likely, given the Chief Justice’s penchant for overturning precedent when it neatly fits his conservative ideology, he just didn’t have the votes. But either way, Obergefell is hanging by a thread. The offensive against it may not come head on, as in a case that seeks to overturn it directly. It will come in cases like Masterpiece Cakeshop, which gives the conservatives a chance to enshrine anti-gay discrimination into law.

It is notable that this petition for review had been sitting at the Supreme Court for nearly a year. The Court may have been waiting until it had its full list of 9 members, even though one of them shouldn’t, by all norms and rights, be there. That means the petition could have been granted by the 4 conservative members of the Court thinking they can peel away Justice Kennedy, who may have written Obergefell but has sided with the conservatives on religious freedom cases in the past. More on that to come.