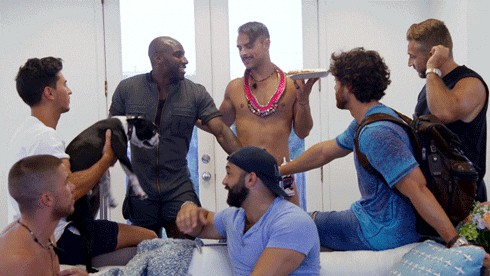 Just like the all the good gay bars and the best poppers, season one of Fire Island is gone, and all we have now are the memories.

Also like those alkyl nitrite-fueled nights, when it’s over, I have the worst headache.

We join the boys in the throes of last week’s fight. Cheyenne is mad Patrick brought a guest that once flirted with his ex-boyfriend. His current boyfriend, Kyle, is just sitting there wearing all flesh-toned clothes and weirdly fleshy-colored hair and flesh-colored flesh, and, honestly, he’s just an upsetting person to look at. Patrick is outside consoling his guest, “actor” Chris Salvatore, who is scream-weeping like someone just told him they canceled RuPaul’s Drag Race.

(Speaking of being upsetting to look at, doesn’t future Cheyenne look like he’s wearing a Chris Salvatore wig in that weird testimonial?)

As has become rote with this show, this conflict doesn’t really build to a boil as much as everyone just sort of dissipates throughout the house like so much Creatine in water.

The next morning, Saint Khasan and Justin sit in the living room discussing how Jorge didn’t come home last night. The producers cut to an old-school Real World-style night vision camera showing Jorge hooking up with a guy, and, hold up. Are you telling me there are night cams in all these rooms, and we are just now, in the final episode, using it? How do we not have footage of Cheyenne’s indiscretion? Beautiful Khasan thrusting into his boyfriend? Brandon scaling Jallen like some sort of enchanted bean stalk?!

Before I can even finish tweeting at Mark Consuelos and Kelly Ripa about how to properly produce a reality show, Jorge rolls in. And, look, I’m not saying Jorge was on cocaine, but if cocaine was a person, it would be Jorge in this scene.

Justin wants so badly to be the fun one that he made every single person in the house (even Chris Salvatore) a T-shirt with his boyfriend’s face on it. This is apparently a “prank.” I’m no James Kimmel, but I’m not sure that’s how pranks work. Whatever, his bf shows up, everyone “pranks” him, and it’s cute enough, I guess. Justin says something about being glad his man is there so he doesn’t have to spoon a pile of T-shirts, but we all know he meant Japanese sex pillow, right?

Cheyenne has the brilliant idea to teach an unsolicited workout class on the beach for all the guys. Is there anything I’d like to do less on vacation than go to a free workout class taught by Cheyenne? (Yes, there is: An original country song open mic.) But, Cheyenne’s butt does look particularly good in his Lulugayman (TM Bobby Hankinson) workout wear.

Patrick shows up to the workout in some Party City Mrs. Roper wig, and it’s like, Patrick, stop it. You did drag, you did your (ho boy) original country song open mic. You don’t get to do characters now. This is not Fire Island Thinks It’s Got Talent.

Later, (I guess? this episode is edited very strangely), Khasan and Jorge retire to the veranda to chug Whispering Angel (which might as well be the seventh castmember). Khasan tells him he’s moving to New York! Also, surprise, here’s Fabio!

That’s right, Jorge’s boyfriend surprises him with a visit. Fabio tells him he didn’t hook up with any boys in Ibiza (what are these people’s lives?!), but it gets awkward when Fabio turns it around like “¿Y tú?” Jorge is honest about his many mistresses, and Fabio seems fine with it. Especially after all the heteronormative nonsense on Finding Prince Charming, I’m glad to see a non-traditional queer relationship portrayed positively, but this was a weird scene to watch. I don’t think Jorge and Fabio owe viewers a detailed explanation about the intricacies of their relationship, but without that context, it’s hard to follow what I’m supposed to be feeling.

So now the house is at max capacity with all the guys, Cheyenne’s bf Kyle, Justin’s boyfriend Austin, Jorge’s man Fabio, Chris Salvatore and several other randos not worthy of a chyron. Patrick is wearing potentially his shortest shorts of the series (so short, in fact, at one point Justin has to point out that his penis is hanging out the bottom) and scraps of denim wrapped around his arms and legs like some kind of gay Wonder Woman nightmare. Patrick pulls a classic reality-TV move and announces to a packed living room that he wants to steal Brandon aside for a private convo.

They lay in bed together talking trash about Cheyenne. You know what’s more disgusting than wearing shorts so short your actual penis hangs out? Laying in someone else’s bed while wearing your shoes, PATRICK. That’s how you get pubic sand fleas!

If that sounds convoluted, that’s because it is! Even though Fire Island technically isn’t a reality competition show, Patrick has been scheming to win all season. I’ve never seen someone so expertly tick every reality show box. He even dropped a single during the course of the show’s first season. That’s impressive! He knows how easy it is to rile up Cheyenne, and he’s made a sport of putting himself in the center of Cheyenne’s drama for weeks. Usually, Patrick seems level-headed compared to grunting, huffing Cheyenne. This time though, his logic feels flimsy. Even Brandon knows better than to stir this up.

Cheyenne takes the bait and confronts Patrick and Brandon in the bedroom. That’s where Patrick lays it all out, trying to pin most of the impetus on Brandon. Now, Brandon doesn’t deny the allegation exactly, but he’s trying his best to keep his contributions to a minimum. Patrick, meanwhile, keeps couching this in altruism, but even Cheyenne easily sidesteps this argument. If Patrick was so concerned about Cheyenne’s immortal soul or whatever, he would’ve talked to him directly, not have a slumber party kiki with Brandon with your dirty sneakers all up in his shee-ee-eets.

Where Cheyenne goes wrong is marching back into the living room and loudly complaining about what just happened, inadvertently outing himself for cheating on Kyle. In a testimonial, Justin says something about how Patrick violated an oath they took “as housemmates, as brothers,” and it’s like, whoa, did you guys all kill a prostitute or something? But it also sort of confirms the story.

As quickly as Cheyenne tries to blow past the details of the accusation, his boyfriend, Kyle (who up until this point was just like a grunting, hulking, gay Teenage Mutant Ninja Turtles villain), starts piecing this together. The more he starts to wonder where Patrick got the idea he cheated on him, the more frustrated Cheyenne gets. And the more frustrated Cheyenne gets, the more he accidentally spills. Cheyenne’s story is he made friends with Alex, and then he wanted to go to sleep, so he brought his new friend Alex back to his house to sleep beside him in a locked room? Even Kyle is like, “Me no understand.”

Hilariously, Cheyenne and Kyle take the convo to the bedroom still wearing their microphones. Cheyenne thinks he’s got a trump card: He’ll just call Alex so he can confirm they definitely didn’t sleep together, to which Kyle replies, “How do you have his number?” Touché.

By the next morning, again, all the drama has simmered down (or the Whispering Angel has worked its way through the boys’ livers). They all go to Pines Fest to see Betty Who perform to a routine choreographed by Khasan. It’s lovely to see Betty Who, an A+ pop star who is also, apparently, a towering giant, but Fire Island really wants us to worry if this performance of Khasan’s choreo will go well. I mean, I wish nothing but the best for Khasan, but I also know that he is flawless, so I’m not concerned his choreo will be anything less than perfect. Surprise: It’s great.

I guess the spirit of the music moved everyone, because they’re all friends again. (Also, Brandon makes out with Chris Salvatore, and no one addresses it.) They sit around the house talking about how much this experience changed them while Patrick eats pie with his bare hands wearing a Speedo with two cans of whipped cream jammed into the leg holes.

Just when I was thinking Patrick really nailed this whole being on TV thing, he leaves us with the most inane aphorisms. First, he reflects on his summer: “I thought I had all the answers, but in the end, I realized I just have even more questions.” Dude, you are GROWN. That is some 21-year-old, navel-gazing nonsense, if I’ve ever heard it. You should be embarrassed to say that about your own life.

Then, regarding his relationship with Cheyenne, Patrick opines: “You know what they say, ‘If you’re gonna put a bunch of sparks in a house, you better expect some fireworks, baby.’” Do they say that? Does literally anyone say that? It doesn’t even make sense! If you fill a house with sparks, you should expect it to burn down.

Then, just like that, a gang of rogue Brandons descends upon the house and sets the whole thing ablaze. We fade out on the Fire Island house engulfed in flames.

Just kidding, but could you imagine?

Anyway, you know I love rankings, so let’s end this by ranking the guys from least to most insufferable.

1. Khasan: Khasan is a beautiful, perfect angel who made it through this whole ordeal without embarrassing himself even once. He never seemed unhinged or wasted or desperate, but he also wasn’t boring or a school marm or flying under the radar. He managed to have a (wonderful, handsome) presence in so many scenes, without ever making a scene, you know?

2. Brandon: Yes, Brandon is a tiny, stupid baby, and, yes, he did string Jallen along, but considering his youth, he seems like he’s got a pretty good head on his shoulders. He definitely had the most fun all summer without descending into sloppy, which is far better than I could have managed at his age.

3. Justin: Justin is adorable, and I’m sure he is very sweet, but he is a lot. He is aggressively emotional in a way that makes me uncomfortable. He’s got so many emotions, and he has the need to talk about them at length, no matter how interesting they may or may not be. If I was his roommate, I’d have to sit him down and explain that I came to Fire Island to drink rosé and get railed, not to have family dinners and talk about our feelings.

4. Jorge: Jorge seems like one of those guys that’s fun until he’s not. He’s a loose cannon. One minute he could be having all-night sex parties with mistresses, and the next he’s screaming at strangers about taking their dicks out by the pool. He’s excited for an underwear party, or he’s crying about his dead dad. He’s showing up at 4 a.m. in Venezuela with a fleet of Escalades, or he’s screaming at you about ruining dinner at home.

5. Patrick: Patrick is certainly not everyone’s cup of tea, but if you can get past all the glitter and skrank tops and his penis literally hanging out of his bikini, I still find him charming. He’s unapologetically ridiculous, and it all feels very authentic and sincere. He definitely came into this with an agenda, and I think it was mostly a success. However, he’s got a thing where he needs to be the center of attention, which is great for TV, but not so great if I’m trying to suss out who I’d most like to spend a weekend with.

7. All the guys who only saw a promo for this show and feel the need to spend weeks anonymously complaining on the internet about how anyone could watch this trash. I see you.

What did you think of season one of Fire Island?