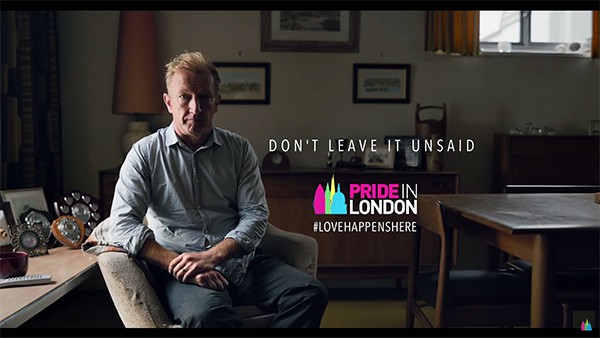 Organizers of the Pride in London festival to be held on July 8 have launched a series of ads in its “Love Happens Here” campaign that feature moving apologies from individuals who have previously not accepted the sexuality of their LGBT loved ones.

The Drum describes the effort:

Created for Pride in London by WCRS, the ‘Love Happens Here’ campaign centers around several LGBT-themed ads directed by Fred Scott which will appear exclusively on Channel 4 during a special season of programming designed to mark 50 years since parliament first voted to legalize homosexuality.

The 30-second spots highlight individuals discussing their regret in pushing away a relative after learning about their LGBT identities. There are four ads pertaining to each letter of the LGBT acronym — Lesbian, Gay, Bi, and Trans — as well as a fifth that features all four stories.

The poignant testimonials include an acknowledgement from each person of their wrongful reactions — such as “I thought you were just attention-seeking” and “I said some hateful things” — following by their asking for forgiveness, concluding with the lingering message “Don’t Leave It Unsaid.”

The ad campaign comes as part of a multi-tiered push to heighten awareness among and elicit participation from the public as Pride in London takes place:

To spread the love even further, Pride in London is calling on Londoners to contribute to the campaign by sharing their own stories here.

Alison Camps, co-chairman of Pride in London, said: “At a time when anti-LGBT+ hate crime continues to rise in London, it’s vital that we highlight this problem and encourage all those affected to report it to the Met police.

But, crucially, this campaign also allows us to look forward with hope, telling the incredible stories of love that make London the thriving and welcoming city we all know.”

The ‘Love Happens Here’ prints will also be available from the Tate as part of their Queer Britain season.

You can watch each ad below:

Previous Post: « Uganda Lawmakers Could Bring Back ‘Kill the Gays’ Bill: VIDEO
Next Post: Don Lemon Tears into ‘Gross and Disgusting’ Trump: ‘The President Should Be Ashamed’ – WATCH »