HARVEY. Dangerous hurricane to slam Texas coast and stall out: “An incredible amount of rain, exceeding 20 inches in some areas, is likely as the storm is predicted to stall and unload torrential downpours for four straight days.”

INDIA. Supreme Court rules Indians have constitutional right to privacy, which could have implications for decriminalization of homosexuality: “Activists have argued that Section 377, which criminalises homosexuality, violates the Indian citizens’ fundamental rights to equality and to life with dignity and privacy.”

ISIS. Terrorist group uses boy to threaten Trump in new video. “My message to Trump, the puppet of the Jews: Allah promised us victory, promised you defeat,” the child who gives his name as Yousef said amid ruins in the terrorist group’s Syrian capital, Raqqa. “This battle is not gonna end in Raqqa or Mosul. It’s gonna end in you lands.”

ROGER STONE. Congressmen who vote for impeachment are endangering their lives. 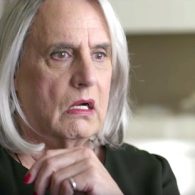 TRANSPARENT. Amazon confirms Season 5 will happen. Soloway: “We are extremely grateful to Amazon Studios for their continued trust and support and to our audience for their warm embrace of the Pfeffermans. We look forward to another season of comedy and drama, love and weirdness, God and sex – in the service of community and in pursuit of peace, joy, freedom and human rights for all.”

DARK FOR 12 HOURS. MTV Australia to push for marriage equality: “The music and pop culture channel, available on Foxtel and Fetch TV, is replacing its usual lineup with an automated message encouraging people to enrol between 6am and 6pm. ”

RICK ZBUR. What was it like to be the first openly gay candidate running for Congress.

ATHENS, OHIO. No more gay conversion therapy. ‘Athens on Monday became the fifth city in Ohio to ban the practice of “conversion therapy” within its city limits, after a unanimous vote by Athens City Council.’

DO YA THINK I’M SEXY. Rod Stewart bringing back his hit song with DNCE.

LADY GAGA. Netflix to premiere documentary about her life.

Previous Post: « Gay Men Love Me: A PSA for Straight People Who Visit Gay Bars — WATCH
Next Post: Spyware Firm Suggests Parents Use Software to Determine if Their Kids are Gay »