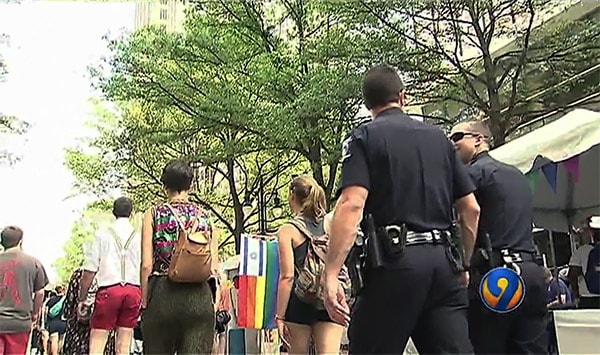 The Charlotte-Mecklenburg Police Department announced its intentions to step up security preparations for the city’s annual Pride parade slated for today, in the face of a threatened protest by a pro-Trump group previously excluded from participation.

The event’s organizers, Charlotte Pride, had decided in June that they would not approve an application from Deplorable Pride, a self-declared “gays for Trump” association. While a reason was not given, the organization reserved its right to decide that a group’s character was contrary to the event’s mission and message. The Trump administration’s several anti-LGBTQ moves have been self-evident, the most recent such example an anti-transgender memo issued this week calling for the draconian barring of transgender troops from the military.

The Charlotte-based Republican group Deplorable Pride said their march will begin 30 minutes before the parade, and they intend it to be “a non-confrontational peaceful demonstration.” The group will walk from Romare Bearden Park on Church Street to the corner of Trade and Tryon streets, which is the center of Charlotte Pride activities.

Charlotte-Mecklenburg Police estimate up to 130,000 people will attend the two-day Charlotte Pride festival and parade, which is the largest annual parade in the city.

A spokesman for Charlotte Pride defended its decision Friday, saying the nonprofit has the right to exclude any group it feels does not reflect the parade’s values of welcoming groups on the fringes of American society, including undocumented immigrants.

“In the past, we have made similar decisions to decline participation from other organizations espousing anti-LGBTQ religious or public policy stances,” according a Charlotte Pride statement. “Charlotte Pride envisions a world in which LGBTQ people are affirmed, respected, and included in the full social and civic life of their local communities, free from fear of any discrimination, rejection, and prejudice.”

In response, the CMPD signaled its intent to increase security, although they characterized it as an acknowledgement of recent events worldwide in which large gatherings have been targeted.

Police have barriers in place blocking streets and officers are keeping an eye on activities to ensure they stay safe. Charlotte-Mecklenburg police officers said they plan to have officers walking around with rifles.

Police said they do not expect any violent or extremist groups to disrupt this weekend’s festival.

“Things have changed around the world,” said Maj. Gerald Smith, of the Charlotte-Mecklenburg Police Department.

Police officers say they are constantly changing tactics to protect large crowds such as the one expected this weekend. Smith said the police department is only aware of one group of peaceful protesters planning to show up this weekend.

“We’ve worked diligently to put together a plan that we think will increase safety significantly up here,” Smith said.

The police department said it contacted the Deplorable Pride organizer to be sure the protest would be peaceful.

Watch a report from WSOC: