This review contains very mild spoilers since everything is essentially a spoiler when discussing mother! since the enigmatic trailer mostly sticks to images from the first act. We won’t go any further than that…

“Baby?” is the first line spoken in Darren Aronofsky’s (Black Swan) new film mother!  but not its first image. The film begins with a defiant girl burning in a house consumed by fire. Javier Bardem collects a gem from the ashes. He places it on a shelf with other less brilliant but similar gems and we watch as the house restores itself from blackened ash. What to make of this rebirth… or is it a timelapse reversal of the destruction? Are we seeing the future or the past?

Cut to Jennifer Lawrence, waking up suddenly in bed. Where is her husband? “Baby?”

While Lawrence is the star she’s a cypher-like presence in this particular film (new for her) a mostly passive figure to whom the action happens. We learn very little about her marriage besides the fact that he is a writer and she spends her time restoring their massive home. Then a knock on the door…

A coughing old “Man” (no characters are named in the film but this one is played by Ed Harris) has mistaken the house for a Bed & Breakfast. The husband, much to the wife’s surprise, let’s the stranger right in, offering him a room to sleep in for as long as he needs. Things only get stranger. Another knock on the door but this time it’s mere a courtesy gesture. “Woman” (Michelle Pfeiffer, utterly delicious in her big screen return) enters the house with total entitlement.

Before long the older woman is badgering the young wife to have children and prying into her life with a disturbing lack of propriety.

The young wife increasingly loses her bearings in the presence of Man and Woman who are intrusive, nosey, rude, and entirely unwelcome as she sees it. So why doesn’t her husband feel the same? And why is the oldest couple so interested in “Him” (Javier Bardem) and why do they have his photo in their bag? 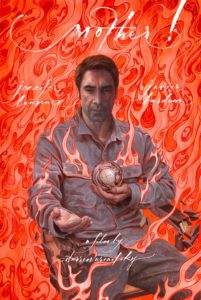 Aronofsky and his trusted cinematographer Matthew Libatique and editor Andrew Weisblum keep you as tense as Lawrence with their jagged darting camera, low-fi images (16 mm film as with some previous Aronofsky titles), and disorienting cuts. They’re constantly circling the young mother, who is already off balance; she can’t believe what she’s experiencing and is perpetually dizzy with confusion.

More knocks on the door. More madness entering and with it an increasingly surreal vibe. Sudden Violence. Grotesque Visions. Blood Stains. Strange Leaks. Exploding Lightbulbs. It’s not just the wife falling apart but the house, too.

To share any details from the absolutely bonkers second act would be a disservice. It will be enough to say that each scene stacks suddenly atop one another like a precarious moving bloody Jenga game played with living things. mother! becomes ever more crowded, cacophonous, ugly, nonsensical and deranged until its spiky and arguably glib end.

…and a lot of people are going to hate it. 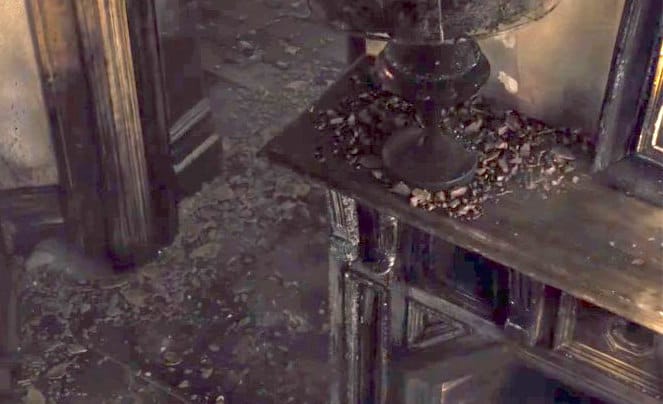 The trick to enjoying it is to not take it literally, for mother! is never literal. Like an exceedingly grim fairy tale, it’s always very pregnant with metaphor. But what is a metaphor of? I’ve already heard several theories including social media as destructive force, impending environmental disaster, abusive marriages, religious extremism. There will be others.

Has Darren Aronofsky made a surreal masterpiece or a self-indulgent folly or some deformed hybrid of the two? Since it’s most definitely cinema why is it restricted to a single set like a stage play? Even after you’ve seen mother! (which you should because movies this strange and non-literal are exceedingly rare) you may have no answers. The film veers insanely from one moment to the next, from brilliance to stupidity to overkill and back again, drunk on its own bravura whatthefuckery.

The questions don’t end with the mystery of its shape, form, and content. Who or what even is the title character? The simple answer you can confirm with your eyes is that it’s Jennifer Lawrence, who midway through the picture is fully round with child. (She is also referred to as “Mother” in the credit scroll). And yet I’m not so sure she is.

“Woman” identifies far more as a mother after all. Pfeiffer’s character has two sons, who we meet briefly (played by real life brothers Brian and Domhnall Gleeson), and extolls the importance of a child to a marriage. But that isn’t quite right. She’s more sinister than nurturing as she circles Jennifer Lawrence early in the film, as if she’s trying to catch the secret scent of her prey.

The film is dense and strange enough that mother! may not even be a woman. The film’s possible environmental apocalypse reading could suggest that the title character is actually Mother Earth, as embodied by the house. The visuals repeatedly stress decay and rebirth with humans always serving as a selfish destructive force. It also could be “Him”, the revered writer married to the pregnant girl, who is the creative force of the film. He makes and shares his art at the expense of all else, ignoring his life. And given his increasingly messianic behavior (glimpsed in the trailer), isn’t he, as so many major movie characters are in auteurist cinema, a mere stand-in for the director. The director is, after all, the god of his own filmography.

In the end isn’t mother! as a perverse self portrait of its director? Aronofsky is remixing the paranoid delusions, obsessive addictions, perverse sexuality, and horrific religious grandeur that have marked his previous films Requiem for a Dream, Noah, Black Swan, Pi, and The Fountain (The Wrestler remains his most atypical film). He’ll repeat the chaotic process of creation over and over again as he embarks on each new film; a fresh gem for an increasingly crowded shelf. That’s the interpretation I’m currently married to, for better and worse, til’ fiery apocalypse do us part.

Still, in all honesty mother! is such a maddening mess of contradictions, epic grotesquerie (you’ve been warned), symbolic overkill, and dull repetitions that everyone is likely to birth their own unique interpretation as the credits roll. The gestation period is 121 minutes and quite unpleasant. Good luck.