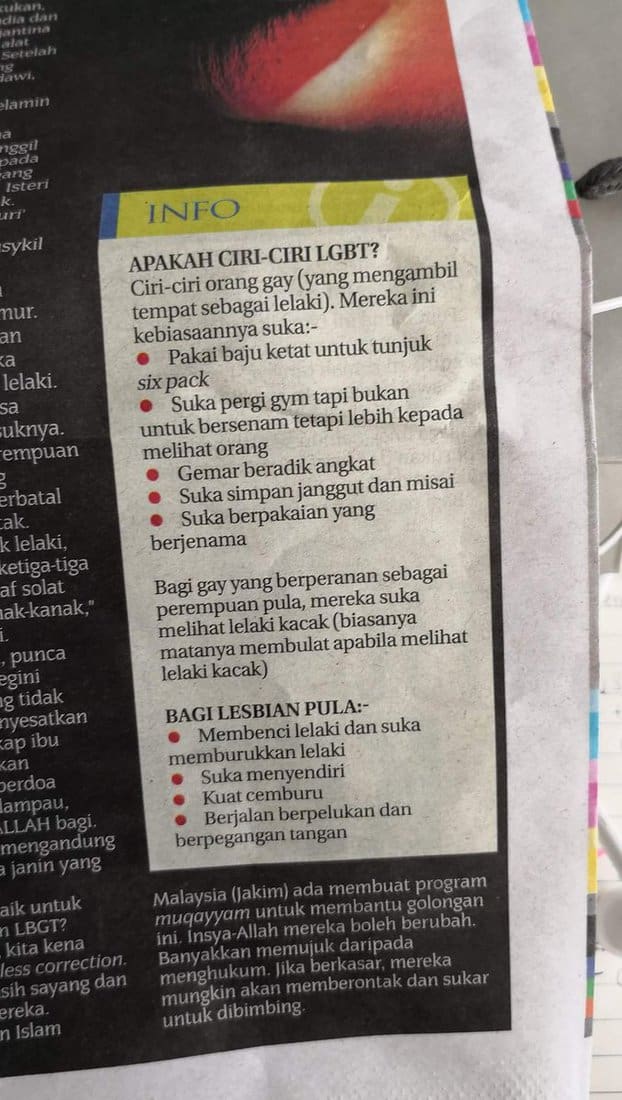 The Malaysian newspaper Sinar Harian published a bullet point checklist on how to spot gay people. Homosexuality is illegal in Malaysia and punishable by 20 years in prison.

The Guardian reports: “The article in Sinar Harian featured bullet points of supposedly distinctive qualities that revealed LGBT people. They stated that gay men were easy to identify because of their love of beards, going to the gym – not for exercise but to check out other men – and branded clothing. Their eyes light up when they see handsome men, the article said. The stand-out attributes for lesbians were that they tend to hug each other, hold hands and belittle men, according to the newspaper.”

Just last year, an 18-year-old Malaysian man died after he was beaten, burned and sodomized with an object by a group of eight youths.

Said Kumar: “There are much more important issues in this country which need to be addressed. If you really want to educate society then explain to them the traits of a pedophile, a molester, a murderer, a kidnapper, people who actually endanger the lives of others. How the hell does a gay person endanger your life? … I know a lot of priests, I know a lot ustads [Islamic scholars], I know a lot of of really really religious people who love keeping beards. Are you trying to say they are gay? That’s how stupid this is.”

The Guardian adds: “The derogatory attitude towards LGBT people in the media is also symptomatic of the increasing influence of conservative Islam in mainstream politics and culture in Malaysia. The Sinar Harian article was accompanied by an interview with Hanafiah Malik, a preacher who warned homosexuality was on the increase in Malaysia and said there was an urgent need to stop the trend. Homophobic rhetoric is also evident even in government discourse. The country’s deputy interior minister attacked Walt Disney last year for refusing to cut a gay scene in Beauty and the Beast at the request of the Malaysian censorship board, and a Malaysian health ministry youth video competition called for entries discussing the prevention and consequences of being gay, lesbian or transgender.”