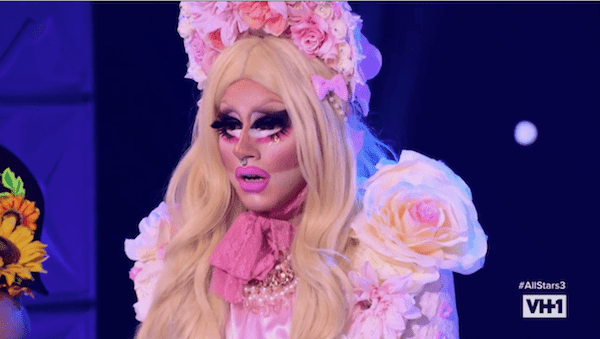 With all the shady mirror messages and getting “cracked” going on, you’d think all these queens would be heading toward seven years bad luck. That certainly seems to be the case for a few of the girls coming out of this RuPaul’s Drag Race All Stars edition of Snatch Game.

Drama on stage and off fueled an episode that pushed the queens to their limits. Mirror, mirror on the wall, who was the fiercest of them all? Find out in our recap and rankings below!

Following Milk’s elimination, the girls arrive in the workroom and find yet another slam on the mirror. It’s not quite as crass as Thorgy’s, but Milk does go out with all delusions of grandeur guns ablazing, reasserting that her elimination was “bogus.” My feelings on Milk’s All Stars appearance have been well-documented, but suffice to say I think her elimination was more than justified, based on her performance alone. Aja also offers that it was a smart move for Kennedy to eliminate a queen that would have gunned for her if given the opportunity. Perhaps Aja is even savvier than she’s let on.

The whole conversation seriously spooks Trixie, because now there’s a whole new element introduced to the game. Not only do they need to focus on the challenges, but they have to play the dramatic reality-TV politics.

To me, it’s more than a little disappointing. The thing that makes a show like the enduring Project Runway so thoroughly enjoyable is that it’s strictly talent-based. The designers even routinely assist one another, because they sincerely want their designs to EARN top spots. Drag Race is usually similar. Putting the pressure to pick the queen that goes home is enough of a twist on the formula to make All Stars fresh, but I would rather they at least attempt to send competitors home based on whom they think was truly the bottom.

The scare could not have come at a worse time. This week the ladies are facing the most beloved (and difficult) challenges: Snatch Game.

As the queens get ready, Shangela notices Trixie has displayed a letter from Thorgy with some nasty comments about Shangela scrawled on it. It’s definitely not Trixie’s proudest moment as she haplessly tries to dismiss the harsher comments by focusing on the positive. Shangela (and I) aren’t buying it. You don’t hang up something like that without knowing the risk.

Roxxxy Andrews (especially season five Roxxxy), for example, would have owned it. Trixie stumbles over her words like she was just caught with her hands in the cookie jar. Later, she would apologize to Shangela, but it’s clear Trixie doesn’t feel like she’s on solid ground with the Daenerys of Drag this week.

Ru checks on the girls with famed comedienne, designer Marc Jacobs(?). The real story coming out of Ru’s visit is his time with Shangela. Originally, she was planning on doing TV psychic Miss Cleo, but once Ru (rightly) notes her accent is more Irish Spring than island queen, Shangela smartly switches to her back-up, Jenifer Lewis.

When they hit the game stage, it’s all over the place. Carson and Michelle are our contestants, while Kristin Chenoweth sits in on the panel for some reason. Sure.

Now, if we truly think about it, they are likely filming Snatch Game for HOURS. I am so curious how these games play out in real-time, without the added canned laughter/applause/“shade rattle.” 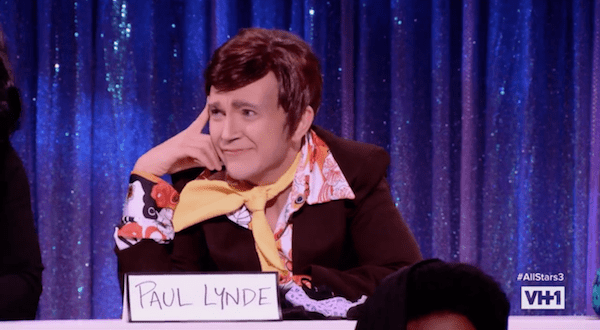 As we see it, Ben crushes as the legendary TV personality Paul Lynde, Shangela delivers a solid Jenifer Lewis and even Bebe surprisingly lends some humor to the iconic Grace Jones.

On the other end of the spectrum, Kennedy struggles to build anything on her Madonna/whore interpretation of Phaedra Parks. Chi Chi chooses Maya Angelou, one of history’s most renowned writers and whose name she can’t even spell correctly on her nametag. It’s … rough.

Most surprisingly, Trixie flounders. A well-established comedy queen enjoying quite possibly the most successful post-Drag Race career, Trixie is known for slaying her webseries-turned-VICELAND half-hour show each week with fellow alum Katya. Expectations were high for her coming into this.

She makes the risky choice to do Ru, and she felt super confident in that choice. Too confident. During the game, she repeatedly hammers home Ru’s cheesy puns, shameless shilling and herky-jerky head movements, but fails to coalesce these pieces together into something with a focused point of view. As an unapologetic Trixie STAN, it was hard to watch.

After a floral-themed runway, Ben and Shangela snatch the top spots, while Kennedy, Chi Chi and a teary Trixie face elimination.

The lip sync is one for the ages. Set to Katy Perry’s “I Kissed A Girl” (ugh), Shangela and Ben pull off one of those lip syncs where they play off each other just enough to make it really feel like a SHOW. They serve attitude. They serve sex. Shangela gives us TRANSFORMATION. They interact and flirt and threaten one another in a way that makes it impossible to look away.

Ru makes the right call in naming both of them the winners. That means both their lipsticks are in play. Ben first reveals that she chose Chi Chi, which, honestly, is a long time coming. Then, Shangela delivers a pre-reveal speech that is such a brazen bait and switch it HAD to be written by producers. Her preamble alludes to how this queen became such a star after losing her season, and immediately Trixie breaks down, assuming it’s about her (which in itself is a little pompous, right?). However, Shangela also chooses Chi Chi.

The Bayou Queen makes a graceful exit (a refreshing change of pace), and, as is the norm, she’s treated to a weird post-elimination Handmaid’s Tale vignette.

My guess is we’ll find out where all that is going after next week’s halfway-point elimination. I could also see a sort of paired Rudemption opportunity — not unlike the one that resulted in Trixie’s return in season seven. What a perfect parallel if Trixie gets the chop next week, and then earns her way back into All Stars.

That bit of theorizing out of the way, let’s return to the present with our rankings.

1. Boy, it’s going to be hard to imagine BenDeLaCreme not making the top three at this point. She’s the frontrunner for the crown, but with such stiff competition (particularly from Shangela), it’s not a sure thing. This week, she delivered a Paul Lynde that obviously fit so well into this format. (Lynde was best known for his gameshow appearances.) It was an inspired choice, speaking directly to Ru’s personal camp sensibilities, and the jokes flew fast and furiously. It’s our first two-time Snatch winner, and a well-deserved one at that.

2. The only other queen in contention for the Drag Race Hall of Fame this season is Shangela. Personally, I feel like her Jenifer Lewis was a little close to everyday Shangela to really blow me away, but she was consistent and, more importantly, consistently funny. The Beyoncé baby photoshoot-inspired runway look was a fun choice, as well. That lip sync though, already a strength for Shangela, demonstrated just how driven and prepared Shangela is to take it to the end. She told a story, and I dug it. She’s playing a smart game already.

3. From here down, it’s a real crapshoot. I guess right now I’d put Aja in this spot? Save for the big miss on “The Bitchelor,” Aja has impressed. I’m glad she’s had the chance to showoff what she’s capable of, even if her Crystal Labeija wasn’t the most thrilling. It was a competent Snatch, but nothing too memorable.

4. If Bebe is in fact playing this game for real, she’s still coasting right through middle. I was pleasantly surprised with the few jokes she tossed out as Grace Jones (a choice Aja correctly pointed out was more of a lewk and an attitude than a character), but I’m struggling to get EXCITED for Bebe.

5. Sigh. Trixie. After weeks of just being FINE, this was a make-or-break opportunity, and she cracked. Perhaps her Ru would have been better saved for a later roast challenge than Snatch game, but as it was presented, there was no satisfying punchline like Ben landed with every single time he opened his mouth. As I mentioned above, I predict Trixie will hit the bricks next week, but earn a Rudemption via whatever the payoff for the Handmaid’s schtick is.

6. Kennedy could very well rocket up to the third spot next week, for all I know. She’s just been all over the place. I know she’s capable of greatness, but it depends on the day if she’s going to bring it. As an avid Real Housewives fan, I know what she was going for with Phaedra, but it felt like it never got beyond her initial thesis (a church lady that likes to get freaky).

7. Chi Chi, darling, I love you. I would love to buy you a drink or 10 if you’re in town. I wish so much success for you. But, Chi Chi, you knew it was your time to go. That Maya Angelou was … nothing? No point of view, barely any visual cues, nothing. You didn’t even spell her name right, honey. Ya gotta at least Google. (Although, the more I think about it, a character based on Maya Angelou meets “Case of the Ex” singer Mya would have been really, really funny. Just very seriously reciting the lyrics to “Ghetto Superstar” like it’s “On the Pulse of Morning” would have had me in stitches.) I’m glad we got to see the next evolution of Chi Chi, but I think she’s still got a lot of growth to go. I’ll be excited to see it when she gets there.